Fatty Liver: the New Epidemic of the 21st Century? Part I

Hepatic steatosis, also known as fatty liver, has become the most frequent cause of liver disease in the Western world and its incidence is increasing since, in most cases, it does not produce symptoms until very advanced stages.

There are several factors that are associated with an increased risk of this hepatic disease progressing, such as alcohol consumption and some other genetic and environmental factors (age, sex, nutritional status, dietary habits, intestinal flora, etc.). That is why lifestyle change and dietary modification are the fundamental pillars in the treatment of this new epidemic.

Diabetes, obesity, and fatty liver: the not-so-new epidemics of the Western world.

Hepatic steatosis, also known as fatty liver, has become the most frequent cause of liver disease in the Western world and its incidence is increasing since, in most cases, it does not produce symptoms until very advanced stages. When should you suspect it? How can we prevent it? Does it have a cure?

Non-alcoholic fatty liver, or hepatic steatosis, has become the most common cause of chronic liver disease in children and adults, and is advancing hand in hand with the global epidemic of obesity and metabolic syndrome. 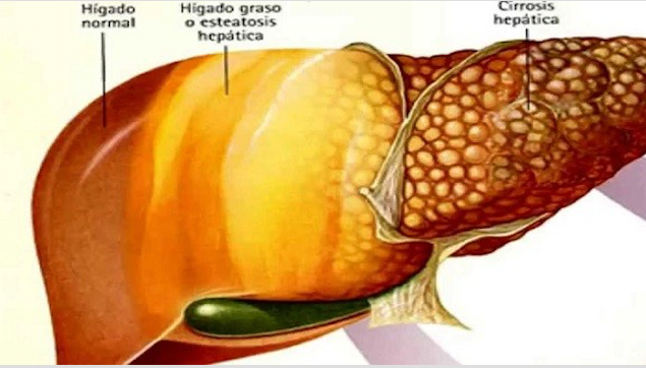 There are several factors that are associated with an increased risk of this hepatic disease progressing, such as alcohol consumption and some other genetic and environmental factors (age, sex, nutritional status, dietary habits, intestinal flora, etc.). That is why lifestyle change and dietary modification are the fundamental pillars in the treatment of this new epidemic.

Throughout this article and the one that will follow, we will try to expose, on the one hand, what hepatic steatosis is, what the mechanisms are that trigger it, and what factors can lead to its development. Subsequently, once we know its risk factors, we will put our effort into providing details on how we can detect and prevent it and even reverse it by preventing it from progressing to a fibrosis or cirrhosis of the liver, which in some cases can end in liver transplantation.

What is the prevalence of hepatic steatosis in the general population? And what about in the population with risk factors? Would that prevalence increase in that case? 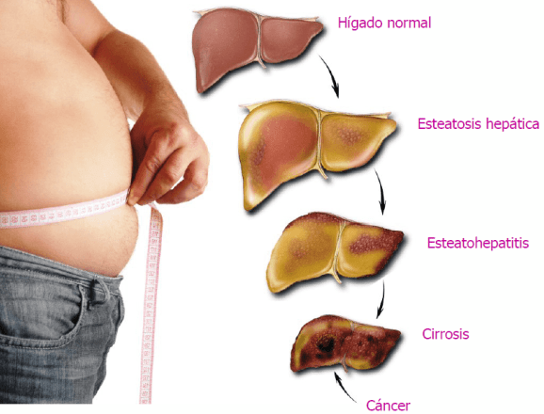 In Spain, the prevalence of hepatic steatosis varies between 17% and 46% in the general population. The overall prevalence in the adult population in Europe is estimated at 25%.

Nevertheless, fatty liver disease is strongly associated with the components of metabolic syndrome, especially obesity, type 2 diabetes mellitus (DM II), and insulin resistance. And it is in this population – those who are obese or have DM II – where prevalence in the western population can reach 70%. And the prevalence of this disease is increasing alongside the increase of obesity and diabetes, true epidemics of the twenty-first century.

In the coming years, the latter will be the most prevalent causes of chronic hepatopathy in our context, because vaccination against hepatitis B and new, direct-acting antivirals will drastically reduce new cases of viral hepatitis.

Pathogenesis of the disease: How does fatty liver occur?

The pathogenesis of the disease is complex and not fully understood. There are many factors involved in the development of the disease: metabolic factors, genetic factors, environmental factors, and factors related with gut microbiota.

Visceral fat produces multiple signals that alter both lipid and glucose metabolism, leading to a buildup of hepatic fat that creates a pro-inflammatory environment causing damage to the liver and other tissues. Inability to cope with this oxidative stress, lipotoxicity, and the apoptotic pathways contribute to liver damage and progressive fibrosis.

But it seems as though it is not only the accumulation of triglycerides that triggers the death of the hepatocytes and the progression of the disease. It is also the presence of saturated free fatty acids (such as caprylic and palmitic acids) that causes hepatocellular injury. Nevertheless, monosaturated saturated fatty acids such as oleic acid reduce cellular stress and hepatocyte death. 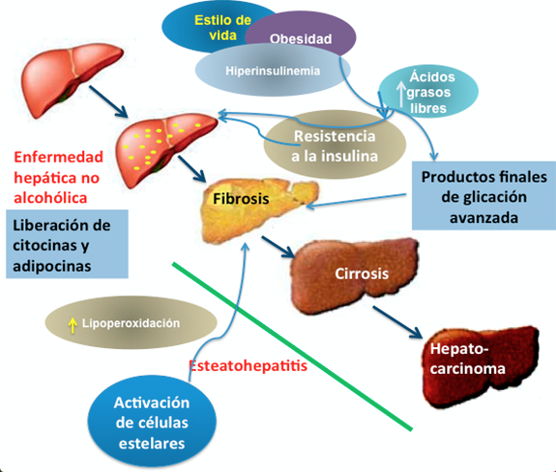 What is the relationship between fatty liver, diabetes mellitus, and insulin resistance?

Insulin resistance can be defined as an altered biological response of the effector tissues: muscle, liver and adipose tissue. Patients with diabetes have a higher risk of hepatic steatosis, but hepatic steatosis can also be a risk factor for the development of diabetes and be a cardiovascular risk factor that favors arteriosclerosis.

In addition, insulin resistance has been associated with increased cardiovascular disease and an increase in the progression of fatty liver disease.

What role does gut flora play in the development of hepatic steatosis?

A high-fat diet, even if there is no obesity, alters the gut microbiota. Mainly there is an increase in the Firmicutes phylum and a decrease in Bacteroidetes. This dysbiosis favors liver disease by activating inflammatory and metabolic mechanisms. Choline synthesis decreases and toxic production increases. Liver inflammation, partly caused by increased portal flow, occurs when permeability increases due to the intestinal inflammation itself, which is secondary to dysbiosis.

Is there anything in our genetics that favors the development of fatty liver?

In recent years, attempts have been made to find a genetic implication in the development of hepatic steatosis and in its progression to fibrosis.

It seems that, to date, it has been possible to link certain single nucleotide polymorphisms (SNPs) located in the PNPLA3 and TM6SF2 genes. Scientific evidence suggests that being a carrier of these 2 risk variants makes you more susceptible to the development of the pathology and its progression. Additionally, several studies suggest that the PNPLA3 risk variant may also be related to our response to a lifestyle change or drug treatment. For this reason, the possibility of genetic screening of at-risk populations is being considered.

When should fatty liver be suspected? Are there symptoms?

Hepatic steatosis is an asymptomatic disease. It is suspected when there is a moderate increase in transaminases in routine blood analysis. It is also sometimes an unexpected finding on an abdominal ultrasound that was originally requested for another reason.

Clinically, some patients report weakness or asthenia and may very occasionally present abdominal discomfort in the right hypochondrium.

In our next article, we will look at when to suspect it, what the best techniques available to diagnose it are, and how to prevent it. We will also discuss how to try to reverse it once it is discovered.