Bacterial overgrowth or SIBO is characterized by an excess of colonic flora in the small intestine, causing various digestive symptoms and in some more severe cases, symptoms of malabsorption.

Gut flora comprises a complex ecosystem, composed of over 500 different bacterial species that colonize the digestive tract from birth and maintain a relatively stable composition throughout life.

What happens when bacteria in the colon invade the small intestine?

Bacterial overgrowth or SIBO is characterized by an excess of colonic flora in the small intestine, causing various digestive symptoms and in some more severe cases, symptoms of malabsorption. 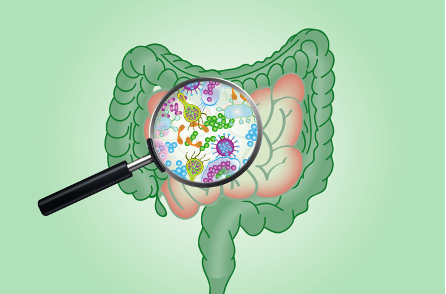 Gut flora comprises a complex ecosystem, composed of over 500 different bacterial species that colonize the digestive tract from birth and maintain a relatively stable composition throughout life.

Such is the number and diversity of this microbiota that the bacteria present in the intestinal tract are much more numerous than the eukaryotic cells.

The stomach and small intestine harbor a fairly small amount of bacteria due to gastric acids and the effects of peristalsis.

Lactobacilli, enterococcus, aerobic gram positive bacteria, and facultative anaerobes are those that predominate in the jejunum and do not exceed 104 organisms/ml.

Bacteroides are the most abundant in the colon and are not often found in the small intestine.

The terminal ileum represents an intermediate area between the aerobic flora of the stomach and the small intestine and the anaerobic microorganisms of the colon. When the ileocecal valve is dysfunctional or surgically removed, the terminal ileum is very similar microbiologically speaking to the colon.

Epidemiology: Who are most susceptible?

The prevalence of SIBO is not entirely clear and depends on the population studied, and especially the method used in diagnosis.

Also, pathologies like chronic pancreatitis, inflammatory bowel disease, and intestinal motility disorders are associated with up to 90% of cases of SIBO.

Causes: What are the risk factors for SIBO?

There are several conditions that predispose individuals to SIBO because they alter the defenses of the intestinal mucosa.

Physiopathogenesis: effects of SIBO on the intestinal mucosa and systemic repercussions. 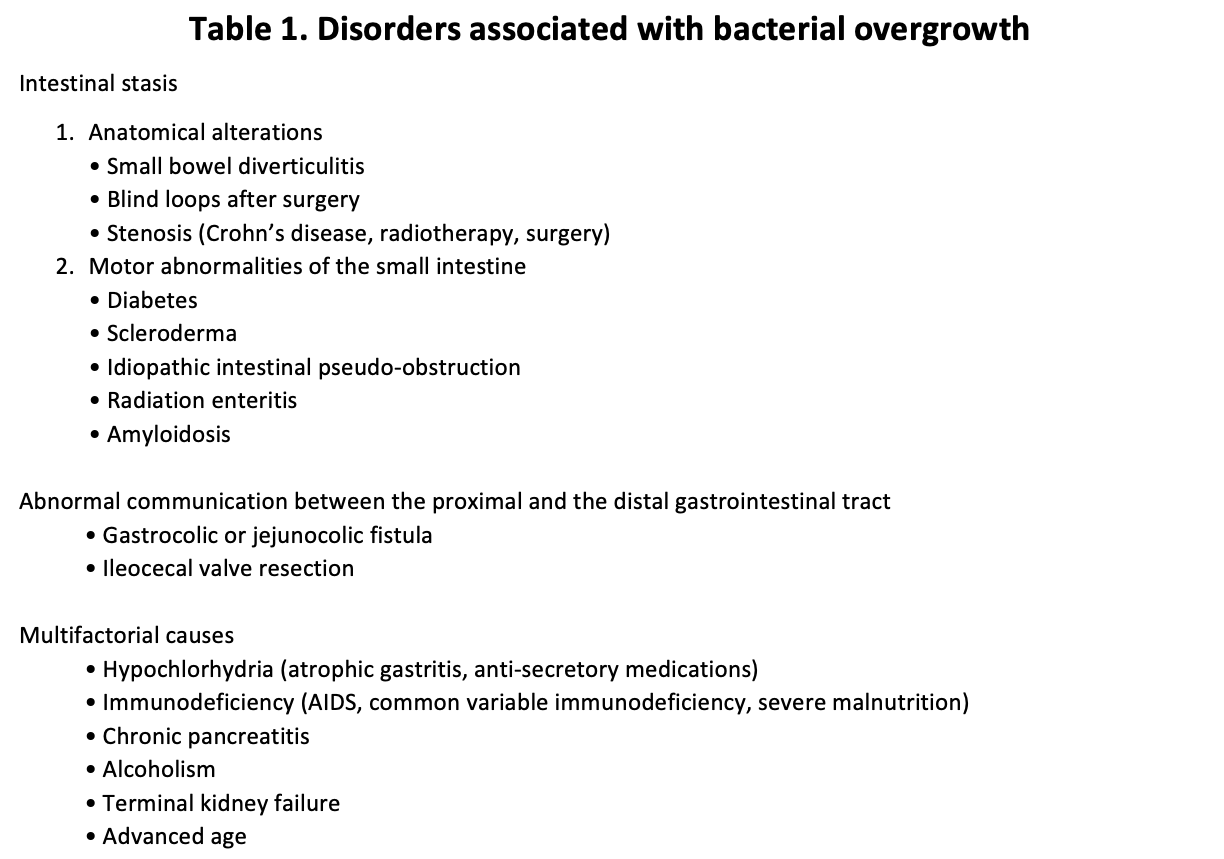 The impairment of the absorption of nutrients may be attributed to the damage caused by the bacterial flora on the enterocyte through the adhesion of bacteria, production of enterotoxins, and the effect of the production of deconjugated bile acids such as lithocholic acid.

Symptoms may vary from a simple weakness to a motley syndrome of malabsorption. 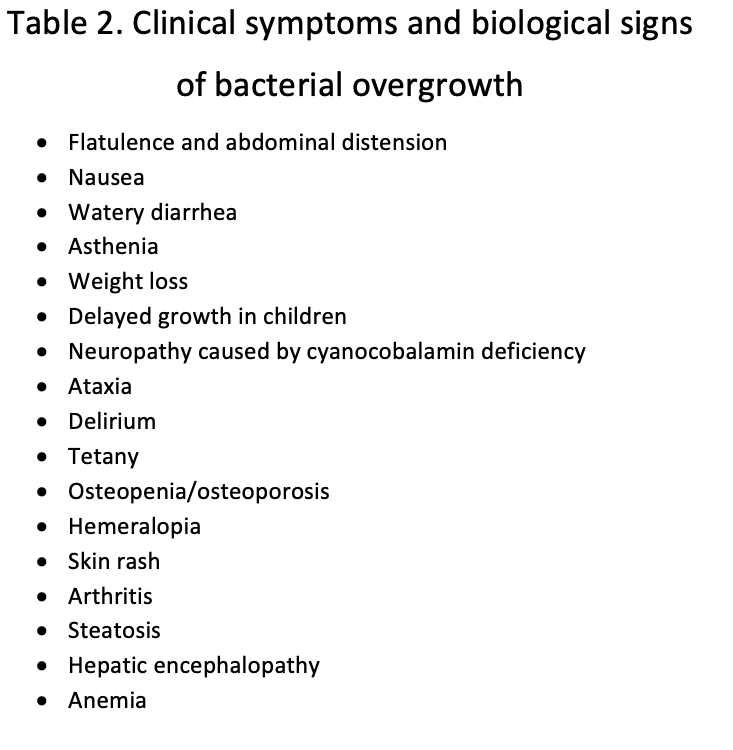 We may also find symptoms derived from vitamin deficiencies, such as macrocytic anemia or sensory ataxia and paresthesia in the most severe cases of vitamin B12 deficiency. Hypocalcemia may cause perioral paresthesia or muscle cramps, and vitamin D deficiency may cause bone metabolism disorders. In extremely severe cases, alterations in the mental state associated with lactic acidosis have been reported after a meal especially rich in carbohydrates.

<p style=”text-align: justify;”Among blood test findings, it is not uncommon to find macrocytic anemia, low levels of vitamin B12 , thiamine and niacin, and high levels of folate or vitamin K. In rarer cases, microcytic anemia may be secondary to bleeding from small ulcers or when associated with ileitis or colitis.

Endoscopy results are usually quite non-specific; only in some severe cases, there may be evidence of associated colitis or ileitis. From an anatomopathological standpoint, there are no specific data, but in some cases, there may be eosinophilia, cryptitis, a flattening of intestinal villi, or intraepithelial lymphocytes.

How do we diagnose SIBO?

We should suspect SIBO in patients who present abdominal swelling, flatulence, intestinal discomfort, and chronic diarrhea.

Diagnosis is confirmed with a positive hydrogen breath test or a bacterial concentration that is greater than 10 3 colony forming units/ml in the jejunum. Hydrogen breath tests are usually preferred because they are simpler, non-invasive, and more economical.

The test is conducted through the administration of a carbohydrate (lactulose, d-xylose, glucose), which when degraded by bacteria produces an increase in hydrogen in the breath of patients with SIBO. The ingestion of foods like bread, fiber and pasta, smoking, the presence of bacteria in the oral cavity, or lung disease may decrease diagnostic accuracy. The diagnosis is confirmed when the levels of hydrogen in breath are over 10 particles per million (ppm) above the baseline or in 2 consecutive samples during the first 60 minutes of the test if baseline hydrogen levels exceed 20 ppm.

The d-xylose test appears to have better sensitivity and specificity in the diagnosis of SIBO, as it is primarily metabolized by gram-negative bacteria, the ideal substrate for SIBO.

Although it is considered the gold standard for diagnosis, it is not commonly used, except in research, and it has its limitations, such as the potential contamination of oropharyngeal flora and the fact that bacteria are sometimes unevenly distributed and content may be aspirated where there are none present.

Treatment: How is SIBO treated?

The main treatment consists of antibiotics aimed at reducing the overgrowth of bacteria. Additionally, in some cases, it is also necessary to treat the diseases associated with nutritional deficiencies (ileitis, colitis, vitamin B12 or vitamin D deficiency).

The antibiotic treatment will depend on the type of overgrowth, risk factors, resistances, and possible allergies.

The most commonly used guideline is the use of rifaximin, 400-600 mg 3 times daily for 14 days. Rifaximin is not absorbed into the intestine and is well tolerated.

When the overgrowth is mainly due to methanogenic bacteria, it is recommended to add neomycin, 500 mg 2 times a day.

In some cases, when there is no improvement in symptoms or an early recurrence (before 3 months), a second cycle of antibiotics is needed.

Nutrition also plays an important role, especially when antibiotics are not well tolerated. A lactose-free diet that includes vitamin replacement and the treatment of nutrient deficiencies (magnesium, calcium) is essential when addressing this pathology. In severe cases, elementary diets may be used for 10-14 days.

How do we prevent SIBO?

The main thing is to eliminate the factors that predispose it, such as drugs that decrease motility (opiates, benzodiazepines..) or treat the associated pathologies (diabetes, Parkinson�s, celiac disease…).

Some patients require prophylactic antibiotic treatment. It is reserved for those who have four episodes or more of SIBO in less than a year or who present associated predisposing factors (diverticulosis, short bowel syndrome…).

In these cases, the treatment consists of cycles of antibiotics that are rotated and given 5 days a month.

Other recommended treatments are the use of probiotics or statins, which decrease the production of methane, although their role is not entirely proven.