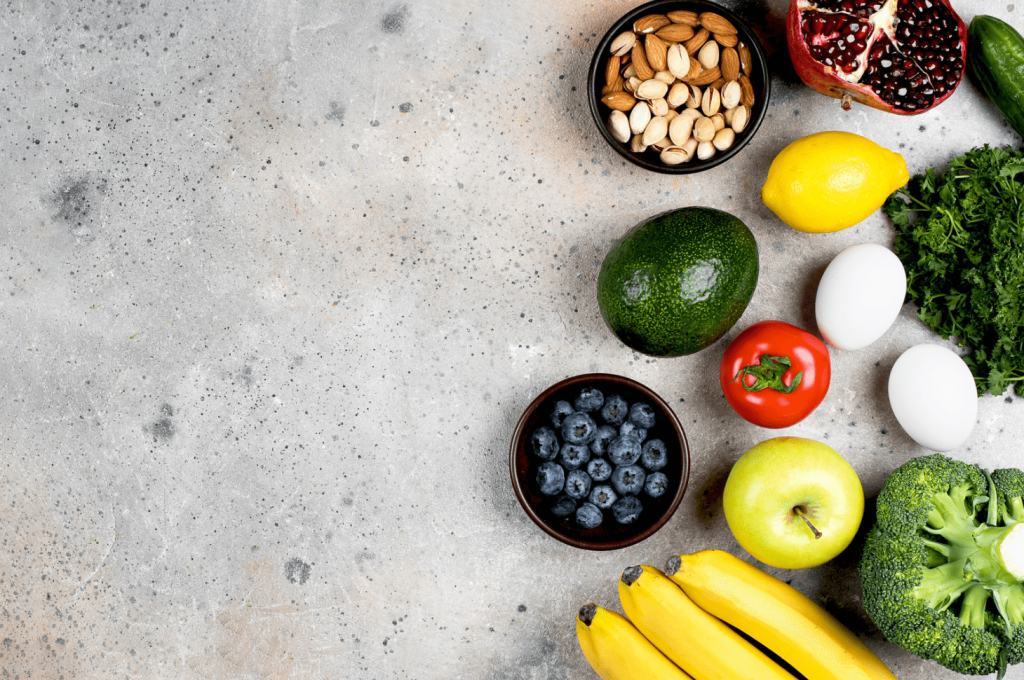 A Diet to Match Our Genes

If we knew what kind of diet and foods we need to stay healthy based on our genetics, would we follow it? Is there a personalized diet for our genes?

We know that eating habits must match our lifestyle, tastes, and preferences, so that they can last over time. However, there is another concept of personalized nutrition that does not involve our tastes, but rather our genetic makeup: precision nutrition.

We know that our diet is a modulating factor for our genes, capable of altering DNA sequences and predisposing to certain pathologies through epigenetic mechanisms; and at the same time, each person has a genetic variability from which we may benefit or even harm ourselves if we follow the general nutritional recommendations. So, could a diet that is based on our genetic needs become a new type of personalized diet?

Nutrigenetics investigates the different genetic variants, known as polymorphisms, both on individual and population levels, and their risk for developing certain diseases, in order to establish specific nutritional recommendations, with the aim of reducing or avoiding the occurrence of the disease to which we are predisposed.

An example to understand this individual genetic variability is the fact that people with the same dietary pattern and lifestyle have differences in blood pressure and cholesterol levels. Another case of genetic variability is phenylketonuria (PKU). People with this pathology should avoid foods containing phenylalanine (an amino acid present in the vast majority of protein foods and aspartame) on a permanent basis. They have the inability to break down this molecule because of mutations in the gene that encodes the enzyme responsible for converting phenylalanine to tyrosine. 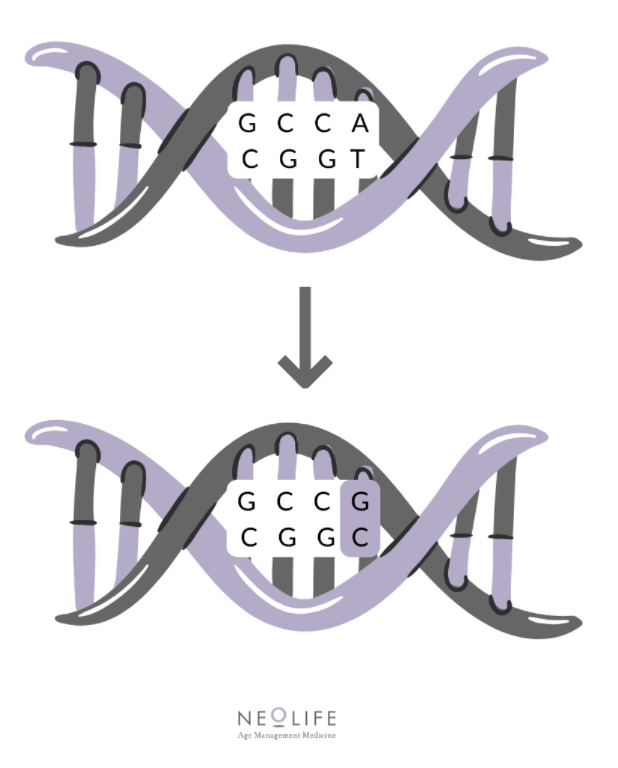 Below, we will go into some of the polymorphisms identified and their effects on health:

Surely we know someone, or even ourselves, whom caffeine does not agree with or, on the contrary, does not provide the desired effect and requires a higher dose.

Caffeine sensitivity is determined by the CYP1A2 gene.

People who have SNP rs762551 in the CYP1A2 gene have a decrease in the activity of the enzyme responsible for metabolizing caffeine, methylxanthine. Therefore, they are hypersensitive to this compound and are considered slow metabolizers of caffeine. These individuals have a higher risk of tachycardia, higher aortic stiffness, higher pulse wave velocity, vascular inflammation, and higher catecholamines after 3 hours of caffeine consumption compared to fast metabolizers.

Polymorphisms in the Apolipoprotein E (apoE)

The diversity among individuals in response to the same dietary fat intake has led to the study of genetic variants involved in fat metabolism, particularly in the gene coding for apoE.

The best known polymorphism is the apoE epsilon mutation, which gives rise to three different alleles: E2, E3, and E4.

The impact of the apoE genotype on the risk of cardiovascular disease (CVD) has been extensively investigated over the past 30 years. A mean increase in CVD risk of 40-50% has been observed in E4 carriers relative to the E3/E3 genotype, with no apparent differences for the E2 and E3 subgroups.

This is because carriers of the E4 allele have a higher concentration of LDL cholesterol than carriers of the E3 allele. In relation to the dietary pattern, individuals with genotypes E4/4 and E4/3 have shown a better response to a decrease in saturated fat intake, specifically genotype E4/3, achieving a greater decrease in plasma lipid concentrations (total cholesterol, LDL, TG and apoB) than genotype E4/4.

Therefore, those with the E4/4 genotype should pay even more attention to their lifestyle, as they are genetically predisposed to have a higher LDL concentration, which is directly related to the formation of atheroma plaque.

Polymorphisms in the PPAR γ gene

Following the context of fat metabolism, we encountered PPAR γ , a nuclear transcription factor involved in the regulation of a number of key genes in β-oxidation of fatty acids and inflammation.

It is currently a gene commanding special attention in research, since it is involved in the development of obesity and, therefore, CVD.

People who present the pro12ala SNP in this gene (PPAR-γ) have a greater predisposition to fat gain and insulin resistance.

Polymorphisms in the NLRP3 gene

The consumption of saturated fats in those individuals who present the rs12143966 variant in the NLRP3 gene manifest higher levels of fasting insulin. So they have a higher risk of insulin resistance and type 2 diabetes, with saturated fat consumption being their main focus of attention.

The intake of polyunsaturated fatty acids (omega-6 and omega-3) has been associated with a lower risk of CVD, both for their ability to regulate the lipid profile and to reduce inflammation. Omega-3 fatty acids (EPA/DHA) have been shown to exert cardioprotective effects. But what about genetic variations? Following the current recommendations for consumption of these fatty acids, can there be subjects on whom they have a detrimental effect on their health?

Polymorphisms in the FADS genes reduce the synthesis of DHA and also ARA (arachidonic acid). Carriers of minor FADS alleles present an omega 3:6 imbalance, generating an inflammatory state and, therefore, a higher risk of CVD. So the recommendations for EPA and DHA intake in these individuals should be higher than those for the general population.

Research on gene-diet interactions is essential to obtain information that will allow us to act in the field of prevention. Nowadays we have genetic tests to know more about the different polymorphisms studied to date: microarrays..

We must not forget that beyond the individual nutrients, what is really important is the interaction between food groups and nutrients. It is not a matter of giving recommendations about specific nutrients, but about dietary patterns. Nutrition is a complex combination of macronutrients, micronutrients, and foods with similar properties. It is difficult to separate the effect of a single nutrient from others. 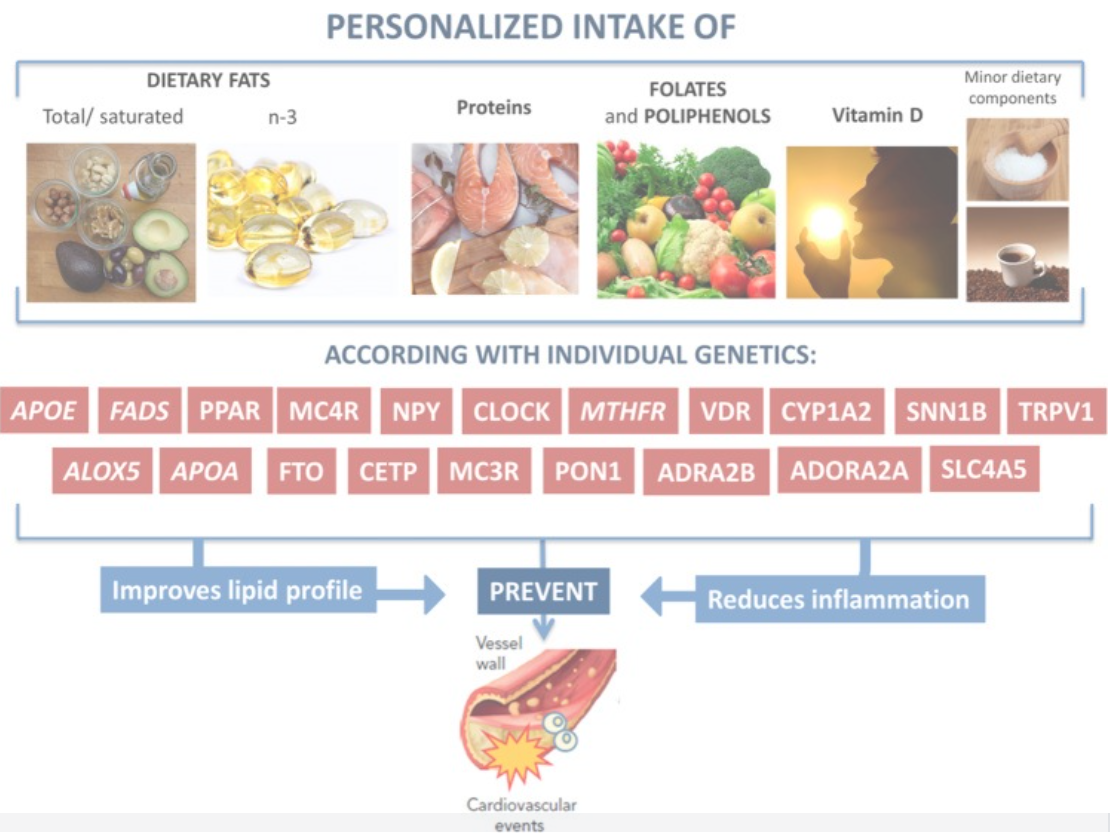