Insomnia is often a reflection that something is very wrong in the body: chronodisruption.

If we do not act to correct disorders relating to the biological clock comprehensively and proceed to only treat the symptoms of insomnia then in the long term the patient will present with increasingly severe pathologies that were initially triggered by the alteration to their biological clock, such as diabetes, metabolic syndrome, obesity, cancer or neurodegenerative diseases.

Our biological clock controls our circadian rhythms, including those which govern our immune and antioxidant systems as well as mitochondrial function.

We have spoken on numerous occasions about the current problem presented by sleep disorders and how we should identify sleep disorders effectively to ensure that we understand both their cause and their consequences. We mention this because in most cases of insomnia the patient history includes a chronobiotic origin, that is to say, a disorder of the biological clock that regulates our circadian rhythms, including those which govern sleep / wake cycles. We have also commented previously that insomnia is just one more manifestation of this chronobiotic disorder, and that if we do not act to correct the disorder comprehensively and proceed to only treat insomnia then in the long term the patient will present with increasingly severe pathologies that were initially triggered by the alteration to their biological clock such as diabetes, metabolic syndrome, obesity, cancer, neurodegenerative diseases, etc. The extent of this inverse relationship has been recently documented and it would appear there is evidence to support a relationship between circadian rhythms, the levels of melatonin and the seasonal variations in multiple sclerosis (1).

At first it is important to understand that the rhythmic expression of our genetic clock is regulated in a very precise way by the activity of our immune system, which is more active as we move towards the end of the afternoon. Our own immune system activity produces a series of molecules related to such activity, including free radicals. Among the molecules produced is nitric oxide, which is a gas belonging to the group of so-called nitrogen free radicals (also known as Reactive Nitrogen Species) (RNS). This carries out very important biological functions, since it is a vasodilator, which reduces the risk of hypertension and protects our cardiovascular system; furthermore, nitric oxide is also a fundamental neurotransmitter and neuromodulator in our nervous system. But if produced in excess, nitric oxide can be very toxic: it has been related to hypovolemic shock in sepsis, and excitotoxicity or neuronal death in diseases such as epilepsy. Each time the immune system is activated nitric oxide is generated; the resulting metabolites, such as nitrites can be measured in the blood and thus the amount of inflammatory activation can be measured indirectly. In addition, the activation of the immune system also produces oxygen radicals (also known as reactive oxygen radicals) (ROS) as a superoxide anion, which reacts strongly with nitric oxide producing much more toxic free radicals known as peroxynitrites, which are responsible for irreversible inflammatory damage to proteins and nucleic acids.

The genetic biological clock also regulates the rhythm of mitochondria function (2,3), which are the energy powerhouses with each cell, that is to say, they are responsible for producing the energy that the cell requires to live and divide as well as repair itself when you need it. To achieve this the biological clock regulates the expression rate of sirtuin 1, a molecule known for its relationship to longevity and closely related to the control of mitochondrial function. As the mitochondrion functions by consuming oxygen which we inhale, a proportion of the oxygen inhaled is transformed into superoxide anion, which is normally eliminated by the mitochondria antioxidant system to prevent it from accumulating and damaging the mitochondria. But this radical can occur in high amounts when the mitochondria function poorly, which could lead to an excess of superoxide anion that will react with nitric oxide producing the toxic peroxynitrites discussed above.

To protect ourselves from said free radicals, both oxygen and nitrogen, the body triggers a complex antioxidant system, which is itself regulated rhythmically by the biological clock and as a result functions according to a typical circadian rhythm.

When these systems fall out of synch, a state of oxidative / nitrosative stress occurs that leads to serious damage to the body.

Then, under normal conditions, if the activity of the immune system causes us to form more nitric oxide than normal and, consequently, more superoxide anion in the evening in an effort to prevent the formation of peroxynitrites then the antioxidant system must be activated. This is what happens under normal conditions and is well reflected in Figure 1 (4). 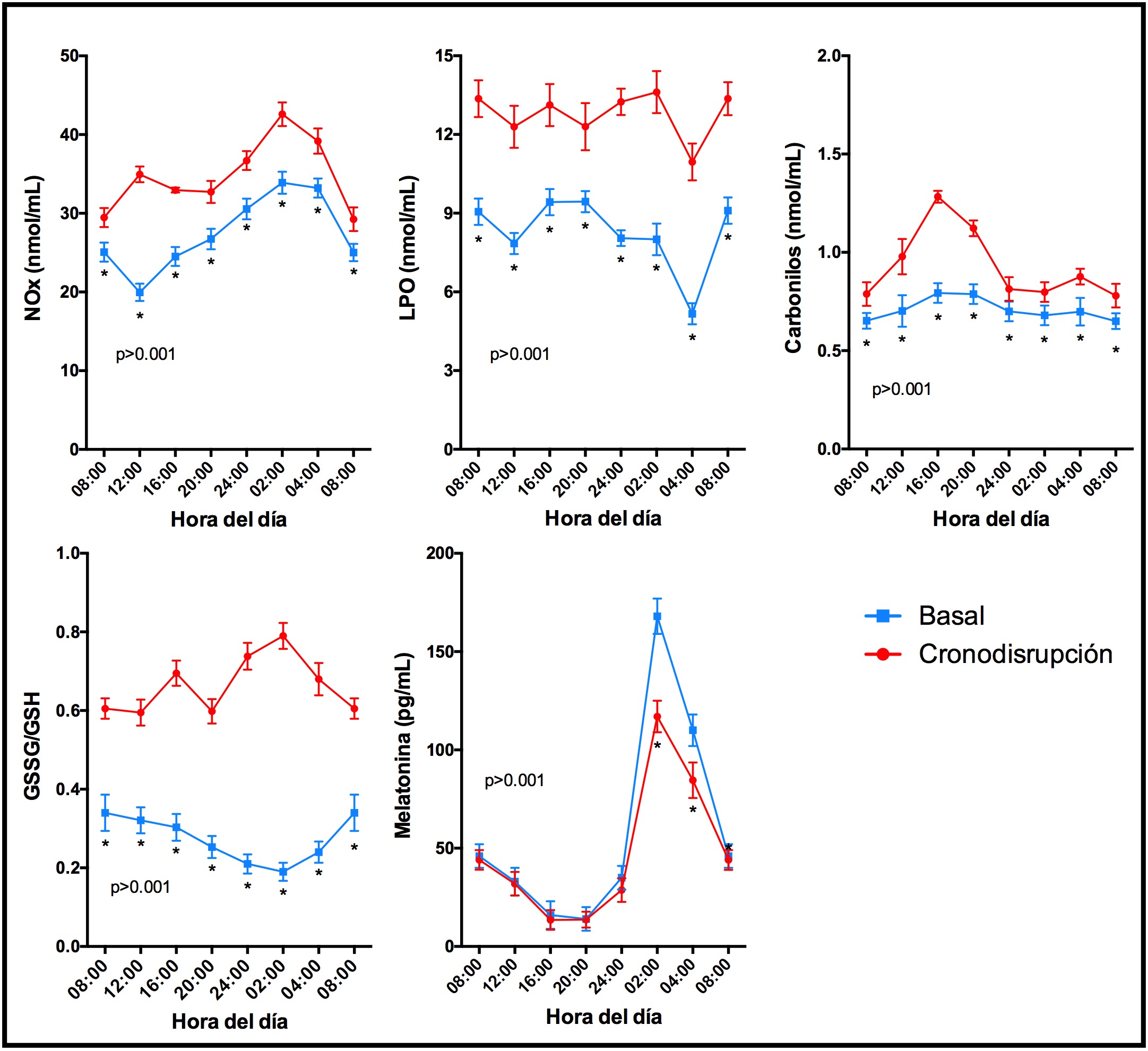 In the figure we see (blue lines) which show how the nitrites (NOx), which as we said reflect the inflammatory activation, increase at night. If the antioxidant system works properly they will not cause any harm to the body as the production of superoxide anion is reduced, which decreases lipid peroxidation (LPO) and carbonyls – that are both markers of the oxidative / nitrosative damage generated by said free radicals. Once this is established we can determine the effectiveness of the antioxidant system, since the glutathione oxidized (GSSG) / glutathione (GSH) ratio, which is an excellent reference of the redox state, is low. If we compare all this information with the circadian rhythm of melatonin, we can see the perfect coincidence between all the circadian rhythms. That is to say, the biological clock is keeping all functions synchronized, which is the same as saying in phase. This includes the rhythm of immune activity and antioxidant activity to control the production of free radicals.

But now we are going to look at the red lines in the figure. Under a situation of oxidative stress, there is a mismatch across all of these systems: there is an increase in the production of free radicals and a lowering in the antioxidant defense capacity. The result is a state of oxidative / nitrosative stress that leads to serious damage to the body. Also in this case the melatonin curve is lower which indicates that there is a chronodisruption that hinders the adequate production and, therefore, the synchronization of all those rhythms.

Let’s see then what happens when there is a chronodisruption. This begins during the first step, the alteration in the sleep rhythm, but behind this disruption there lies the alteration to the other rhythms. There is a desynchronization between the production of free radicals and the antioxidant systems and an increase in the former. This excess of free radicals also causes damage to the mitochondria that do not work properly and generate more free radicals that damage their function. This causes the mitochondria to not provide enough energy to metabolize nutrients, which in turn causes the mitochondria to be stored in the form of fat. As a consequence we produce fat, possess an increased insulin resistance which often leads to a diabetic state that causes the further development of neurodegenerative diseases, in terms of the connection between diabetes and (Alzheimer’s as well as the association between free radicals and (Parkinson’s). The inadequate production of energy by mitochondria gives rise to a hypoxic state which, together with the damage to DNA by free radicals, provides the ideal environment for the development of cancer.

That is to say, which we always come back to, that insomnia is often a reflection that something is very wrong in the body. That something dysfunctional within our biological clock has the potential to cause many more negative consequences within our body than we can possibly imagine. Whilst we want to cure those of insomnia, to cure insomnia is not a solution that can help us solve the underlying cause which has affected the health of the patient in the first place.

The circadian rhythm of melatonin curve, the key test to avoid chronodisruption.

From this brief summary, we want to highlight the importance of measuring the free radicals and the antioxidant defense system in cases where you suspect chronodisruption. This applies not only when there is a sleep disorder but also in all the pathological situations referred to above. By reference to the biological clock function assessment, the genetic chronotype and the circadian phenotype assessment through the circadian rhythm of melatonin curve, we are able to determine the degree of alteration that the body is suffering and, in this way, we can take steps to remedy the situation before it becomes too late.