Pregnenolone: the importance of neurosteroids

This hormone is not only a precursor to other hormones as was once thought; it has also shown to have very important effects at the central nervous system level.

Neurosteroids such as Pregnenolone, DHEA, etc. have a modulating effect on neural excitability and synaptic plasticity. They also have many other functions associated with neuroprotection, stress response, mood regulation and cognitive performance.

In the brain, pregnenolone and its derivatives, including dehydroepiandrosterone (DHEA), perform very important functions.

Pregnenolone had been considered an inactive steroid with no biological function other than to serve as a precursor to other steroid hormones. Its anti-inflammatory and anti-fatigue properties have been known since the 1930s (1).

Pregnenolone is synthesized from cholesterol in tissues such as the adrenal gland, gonads, and placenta. It is also synthesized in the central and peripheral nervous system as a neurosteroid, mainly in glial cells and neurons (2). 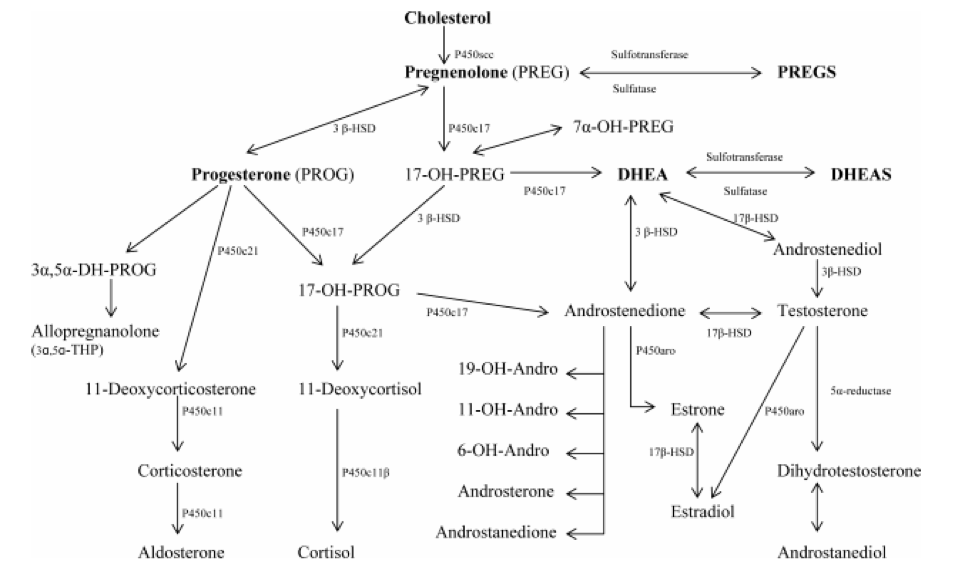 In the brain, pregnenolone and its derivatives, including dehydroepiandrosterone (DHEA), widely commented on in other entries of this Blog, perform very important functions, which we explain in detail below:

Pregnenolone has antidepressant and anxiolytics effects (3). It has also been shown that patients taking Diazepam have seen reduced sedative effects while maintaining the anxiolytic effect. It improves depressive symptoms in patients with bipolar disorder (4).

In animal experimentation models improved learning and memory with effects on neural plasticity (5) have been shown. It has also shown promising effects for mitigating memory loss and even some structural changes in Alzheimer’s disease (6,7).

Administration of pregnenolone has been shown to reduce the formation of gliosis (scars) following traumatic brain injury (8), amyloid protein neural toxicity and regulate myelin synthesis and repair in the CNS and peripheral nervous system (9). In addition, it protects nerve tissue from further damage following medullary injury and helps in the recovery of motor function (10).

Studies show that it may have potential as a therapy to reduce alcohol intake in individuals who abuse it. Recently it has also been shown to reduce some of the effects associated with cannabis use and decrease the motivation to continue using it (12).

Administration of pregnenolone has been shown to alleviate certain symptoms of schizophrenia (13).

From the above it is clear that pregnenolone can be a very powerful weapon in the therapeutic arsenal of Neolife professionals to improve cognitive function, mood and offer neuroprotection to our patients.