Insomnia is another manifestation of a much greater disorder within our body, chronodisruption.

This alters our other circadian rhythms, which can lead to increasingly severe pathologies, such as oxidative stress, inflammation and, consequently, hormonal disorders, metabolic disorders including metabolic syndrome, diabetes, neurodegenerative diseases and tumors. The solution: treatment with melatonin.

According to a recent study, if we do not get enough sleep, our brain is damaged by the lack of sleep.

The 18 March is a day dedicated to sleep as World Sleep Day, which reflects the widespread interest and concern in the increase in sleep disorders among the general public. It is, therefore, an appropriate time to emphasize that insomnia is not only a problem that concerns a lack of sleep, which in itself is already a priority; it is much more worrying than the single problem suggests. Let’s see why.

We shall begin at the end: Why do we sleep?

It is widely understood that we sleep to repair the body following our daily activities, but recently, an excellent work (1), has demonstrated (through the use of rats) that when we sleep, the space between our neurons expand, like a sponge, which facilitates the elimination of cellular waste that is produced by our metabolism during the day and whose accumulation is toxic to the brain. In rats that were prevented from sleeping it was noted that this phenomenon did not occur, and cellular debris accumulated within the brain, which caused damage to the neurons and altered normal brain function. As such, it could be argued that if we do not have enough sleep our brain will be damaged in the same way which will slowly and progressively affect our cognitive function.

And now we can return to the beginning: what causes sleep problems?

Leaving aside organic causes, most sleep disorders are of a chronobiotic origin, that is to say, due to an alteration in the system which regulates the circadian rhythms in our body. This system is formed from a group of neurons located in the suprachiasmatic nuclei (SCN), which are two areas of our brain that are connected to the outside through the optic nerve. These neurons form what we call the central biological clock. In this way, the biological clock receives information regarding the amount of light in our environment. As the day/night cycle, which is the same as the light/dark cycle, lasts 24 hours, the biological clock works to the same rhythm, that is to say, to a 24-hour rhythm. We call such types of rhythm circadian, that is, close (circa = close) to a day. The rhythmic function of the biological clock in turn produces signals that are transmitted throughout the body to ensure that the body functions in a coordinated manner. As a result, it is the biological clock that allows the body to adapt to daily changes in lighting and temperature, amongst other elements and that is why the clock is responsible for regulating the rhythms of all biological functions. Furthermore, the sleep/wake rhythm, the activity/rest rhythm, body temperature, hormonal rhythms, cerebral neurotransmitters rhythm, rhythms relating to our metabolic activities, etc., are all governed by the circadian rhythm set by the biological clock. As a consequence when our body functions in a coordinated manner we are able to adapt perfectly to our environment (see figure below). 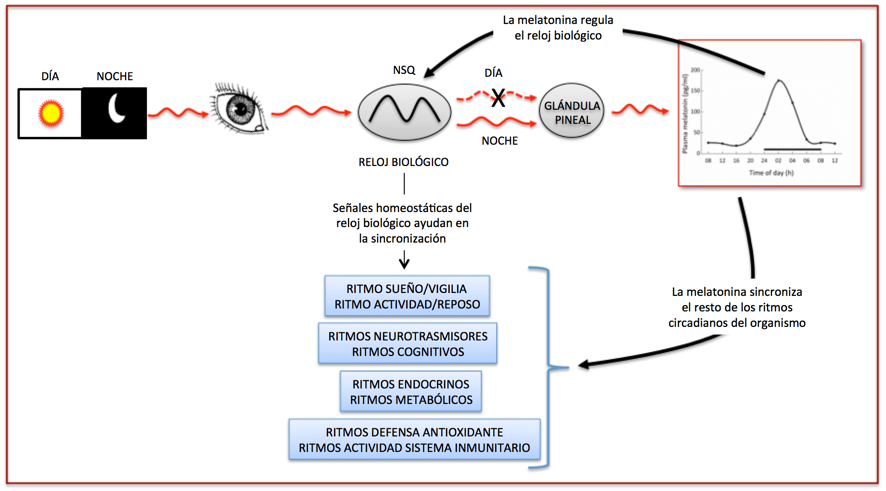 How does the biological clock instruct the rest of the body to synchronize their functions to a 24-hour period?

This is achieved principally through melatonin. The biological clock sends a signal every 24 hours during the night to the pineal gland to produce melatonin, which secretes itself into the circulation and is immediately transported through the body. This signal, which has a nocturnal spike is interpreted by all organs and tissues within the body to set in motion their own circadian functions. Since the peak in melatonin is produced exactly once every 24 hours, the whole body is synchronized at the same time.

Now let us consider: when we have insomnia, what really happens to our body?

The first thing we want is for the doctor to return our sleep to normal because when we suffer from insomnia we do not sleep. We are exhausted during the day, our attention, memory, physical capacities, etc. all decrease. And we blame all of these symptoms on not sleeping properly. We are correct to some extent. But let us consider the problem from another perspective: What if what is happening to us is that the biological clock is malfunctioning? In this case insomnia occurs as a result of the malfunction.This is one of many alterations which also occur; our whole body malfunctions, and a sleep disorder is the manifestation of the underlying problem. So if we treat lack of sleep with hypnotics, we are simply correcting (if one can call it correcting) the altered circadian rhythm in terms of the sleep/wake rhythm. This is an important distinction as all other rhythms remain desynchronized. Therefore, one cannot state that the treatments correct the problem, they only serve to cover the problem and in some cases can actually aggravate the underlying problem.

When the biological clock is not functioning properly, we refer to chronodisruption, which is the most frequent cause of sleep disorders and other circadian rhythm disruption.

What is the main cause of chronodisruption?

Our social activities and excess light, often referred to as environmental light pollution, have been affecting the people of industrialized countries for a number of years. It is estimated that we have a sleep deficit of between 1.5-2 hours a day, which means that instead of sleeping 7-8 hours a day, we sleep less than the recommended amount. The light from cities, our habit of going to bed later, street lights, televisions, and even the tablet we use in bed all condition us, at best, and inhibit our biological clock and causes a subsequent delay in the production of melatonin due to the increased light until late into the night. But frequently even this light exposure completely inhibits the operation of our biological clock and the production of melatonin. The consequence of said chronodisruption is that all of the rhythms dependent on the biological clock and melatonin are affected. For this reason, light pollution and a melatonin deficit are commonly associated with metabolic syndrome, type 2 diabetes, neurodegenerative diseases and cancer, amongst other disorders. Chronodisruption can also be caused by medication and this includes the hypnotics that are so excessively prescribed for insomnia. They inhibit melatonin production, cause chronodisruption, and can lead to more serious disorders than the illnesses that they try to treat.

What is the solution then?

The first thing we must do is identify the chronodisruption, which, although this can be easily achieved through questionnaires it is difficult to detect during a simple consultation. Secondly, we must identify the degree of desynchronization, that is to say, the extent of alteration to the circadian rhythms in the body which result from the biological clock malfunction. This alteration can be moderate or severe. Since the biological clock controls the rhythm of melatonin and this in turn controls the rest of the rhythms within the body, the determination of the circadian rhythm of melatonin can be used to determine how severe the chronodisruption is for the person concerned. The circadian rhythm of melatonin is also relatively easy to measure. Thirdly, sometimes it is necessary to carry out additional assessments to identify other components of the rhythm disorder. Typically this is achieved by using sensors placed on the wrist and arm which allow measurements to be taken throughout the day which record parameters relating to the rhythms in body temperature, lighting, physical activity, rest, etc. When combined with other assessments this is sufficient data to allow us to correctly diagnose the chronobiotic disorder, or chronodisruption. 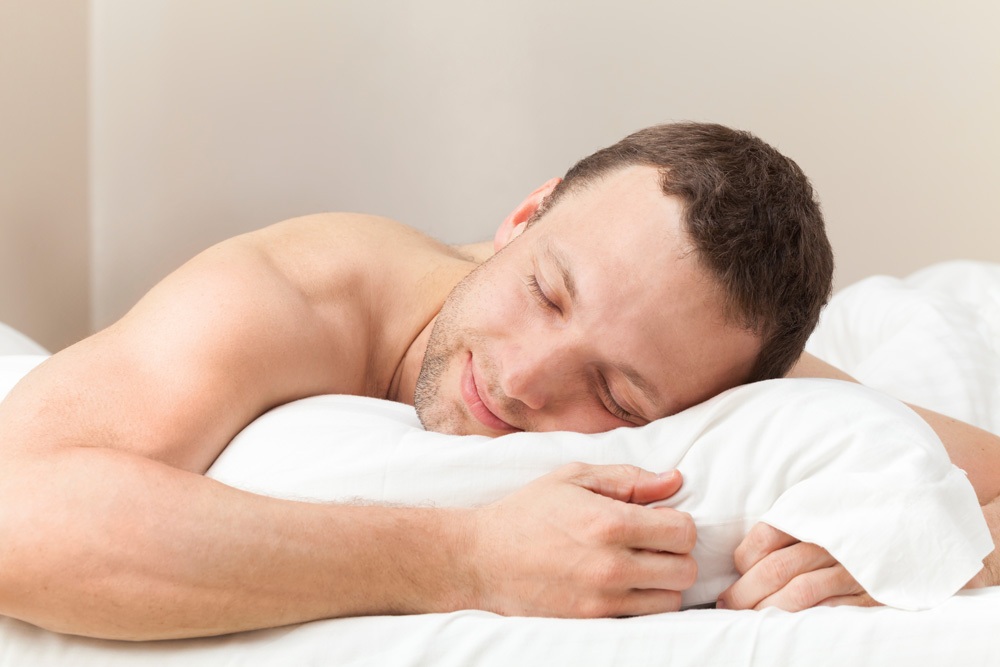 And now that we know that our biological clock is not functioning properly, how do we fix it?

This depends on the “disorder” in question and the difficulty varies accordingly. It goes without saying that we must start from the established position (2), which specifies that melatonin is the drug of choice for the treatment of insomnia. We know that the biological clock is regulated by melatonin itself, which can be resychronized by the introduction of melatonin. It is very likely that when the clock is broken that melatonin production also ceases or is disrupted. As a result many believe that administration of melatonin can correct the problem, not only of sleep, but also simultaneously the problem relating to all the affected rhythms and restore normal function to the body (3). But you have to be careful, as the biological clock is sensitive to melatonin at certain times of the day, and inappropriate use of melatonin, both in terms of dosage and time of day could negate the beneficial effect intended and could worsen the situation.

Remember that insomnia is another manifestation (the most apparent) of a much larger disorder within our body, chronodisruption, which alters the other circadian rhythms in our body. This dissociation between our rhythms can lead to increasingly severe pathologies, such as oxidative stress, inflammation and, consequently, hormonal disorders, metabolic disorders including metabolic syndrome, diabetes, neurodegenerative diseases, and tumors. If we only treat the insomnia, this is a bad solution for the body. We have to repair the biological clock, and everything will work once more. Because of the continued interest in this subject, the relationship between chronodisruption and systemic disorders will be the subject of another article in the near future.

Authors of the article: Darío Acuña Castroviejo and Germaine Escames – Directors of the International Melatonin Institute