Is Homocysteine the New Cardiovascular Risk Factor of the Century?

Homocysteine is a sulfur amino acid that is essential in cellular metabolism. It is synthesized in our body from another amino acid: methionine. The only source of methionine is animal protein.

There are various enzyme defects in the metabolic pathway of homocysteine that are genetically inherited. In addition to these inherited alterations, there are other causes that may lead to higher levels of homocysteine. These include dietary factors, nutritional alterations, such as folate deficiency and failure to absorb vitamin B12, smoking, excessive coffee consumption, and aging, among others.

In most cases of elevated homocysteine, there are low levels of vitamin B6, B12, and folic acid (B9).

We have been hearing about homocysteine and its link to cardiovascular diseases for some time, but what exactly is homocysteine? Is it a risk factor comparable to tobacco or cholesterol? And most importantly: what can be done to control its levels?

Homocysteine is a sulfur amino acid that is essential in cellular metabolism. It is synthesized in our body from another amino acid: methionine. The only source of methionine is through the consumption of animal protein.

This methionine we ingest is metabolized into homocysteine mainly in the liver. Homocysteine may then follow two different pathways:

Homocysteine metabolism is closely linked to B vitamins.  While vitamin B12 is involved in remethylation, vitamin B6 acts as a cofactor in transsulfuration. 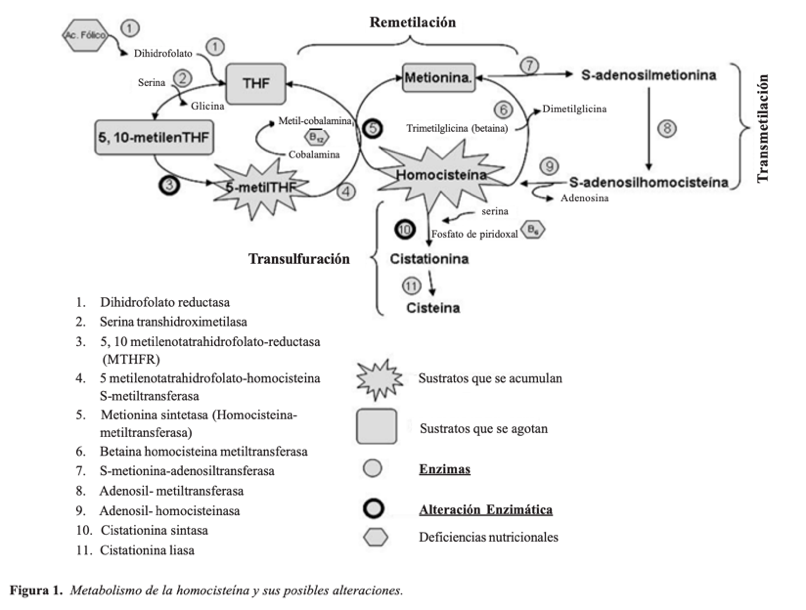 There are various enzyme defects in the metabolic pathway of homocysteine that are genetically inherited, most of which through autosomal recessive genes. These defects affect the enzymes involved in the aforementioned processes (remethylation and transsulfuration). These enzymes facilitate the degradation of homocysteine back to methionine or on the other hand, its transformation into cystine and its elimination in urine. The most common alteration is cystathionine-β-synthase deficiency, which causes a disorder called homocystinuria.

In addition to these inherited alterations, there are other causes that may lead to higher levels of homocysteine. Among them, the most important are dietary factors. As we have already mentioned, homocysteine is produced from methionine, whose main source are the animal proteins present in meat, eggs, and dairy products. Vegetable and plant-based proteins have much lower amounts of methionine.

Let’s not forget that the vitamins of the B complex (B6, B12, and folic acid) are fundamental to homocysteine metabolism and elimination.

Nutritional alterations such as folate deficiency and failures in the absorption of vitamin B12 may lead to enzymatic malfunction and higher homocysteine levels. These vitamins are easily destructible by physical and chemical means, such as those used in food processing and preservation. Therefore, a diet that does not include sufficient amounts of these vitamins and is rich in animal-based or highly refined foods will lead to an increase in blood homocysteine levels.

Even aging itself increases homocysteinemia (the older you are, the higher the levels of this amino acid in the blood), which is most likely linked to a worsening of the kidney function and a decrease in cystathionine-β-synthase activity.

So, what is the role of homocysteine in cardiovascular disease?

Homocysteine in the blood is oxidized (forming homocystin and other compounds), and in this process, both hydrogen peroxide and free radicals (hydroxyl and superoxide anion radicals) are formed, which are so reactive that they damage the endothelium. This lesion exposes the subendothelial matrix, and this also stimulates platelet aggregation. 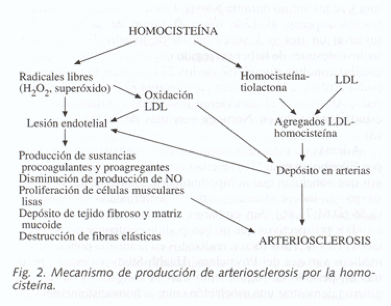 On the other hand, these free radicals are also capable of producing oxidation of lipids, especially LDL (low-density lipoproteins). These oxidized proteins have a highly toxic effect on the blood vessel wall and are easily recognized by endothelium macrophages.

Additionally, if homocysteine levels are very high, this leads to the formation of homocysteine thiolactone, which is very reactive and causes aggregation with LDL in the liver. This aggregation in the blood is in turn captured and degraded by macrophages that release more lipids and cholesterol, which are deposited in the atheroma plaque.

Several other alterations that also occur are a decrease in nitric oxide, the proliferation of smooth muscle cells in the arterial wall, the alteration in collagen synthesis, and the destruction of elastic fibers of the vascular wall. 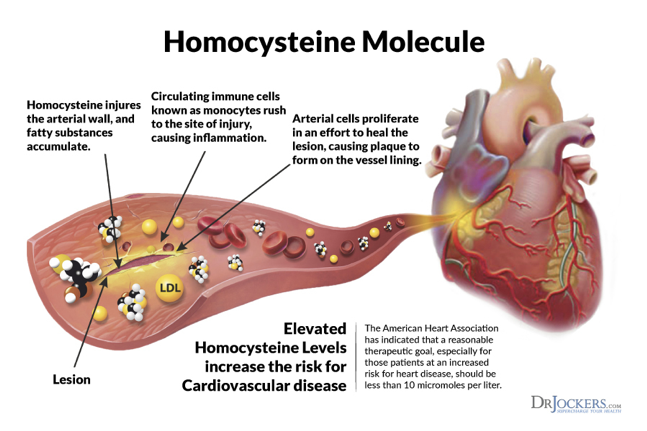 And what about its role in thromboembolic disease?

When the endothelial surface is damaged by free radicals due to high levels of homocysteine and its derivatives, it also expresses procoagulant substances. Among others, there is an increase in thromboxane A2, the activation of factors V and XII, an increase of tissue factor, a decrease in the activity of protein C and tissue plasminogen activator, the inhibition of thrombomodulin expression, and an increase in platelet activity.

Now, how can we control homocysteine levels?

In most cases of elevated homocysteine, there are low levels of vitamin B6, B12, and folic acid (B9). Many studies have confirmed that the supply of folic acid supplements, alone or in combination with one of these B vitamins (B6 or B12) lowers homocysteine concentration within 2 to 6 weeks. And this effect has been observed even in individuals who did not present a deficit in the values of any of these vitamins.

Let’s also not forget that excess animal protein and a diet rich in highly processed foods is a source of methionine, which may lead to hyperhomocysteinemia.