mTOR and AMPk: The Two Sides of Metabolism You Should Know About and Balance Part I

The mTOR and AMPk metabolic pathways are of paramount importance for the control of metabolism and its two classic phases, anabolism (tissue creation) and catabolism (its destruction) but also in the development of pathologies. By knowing what they are and studying them, we may obtain therapeutic weapons against cancer or diabetes.

The AMPk pathway acts more like an energy sensor in our body. It detects when we have ATP deficiency (our energy currency) and sets into motion the mechanisms to get it back through the oxidation of fatty acids in muscle and liver, improving insulin resistance and glucose entry into the muscle, and inhibiting triglyceride synthesis.

Over-activation of the mTOR pathway may lead to cancer, insulin resistance, diabetes, Alzheimer’s and Parkinson’s, among other diseases.

As promised in our previous blog posts, we will go into greater detail about these two metabolic pathways, the AMPk and mTOR, both of paramount importance in the control of metabolism and its two phases, anabolism (tissue creation) and catabolism (its destruction). But they also have a huge influence on pathology, and we’re not talking about strange pathologies we have never heard of before, but rather diseases like cancer, diabetes, cardiovascular disease, Alzheimer’s, Parkinson’s, etc.

Is your interest piqued? Read on and find out how you can achieve a balance between these pathways to live a longer, healthier life (Xu J et al. 2012).

This metabolic pathway is formed by a series of proteins that regulate processes as important as tissue creation through protein synthesis and cellular hyperplasia. It is therefore a fundamentally anabolic pathway. Its name comes from the discovery made regarding its relationship with Rapamycin. The inhibition of this pathway with Rapamycin leads to increased longevity (Mammalian Target Of Rapamycin). In addition to this drug, it is regulated by other factors such as insulin, IGF-1 (insulin-like Growth Factor-1), amino acids (leucine), strength training, etc.

Indeed, the inhibition of the mTOR pathway has been linked to an increase in the longevity of certain organisms (Johnson SC et al. 2013). Apparently, on a biological level, tissue creation is at odds with longevity. Thus, fast-growing animals have a short life expectancy (see, for example, a mouse vs an elephant). Increased protein synthesis, the creation of tissue. and cell hyperplasia are beneficial during youth to help the body grow, but subsequently keeping this pathway activated would have negative effects on longevity. Does this mean that we must always inhibit it? No. Balance is the important thing, as we said at the start. There are specific situations where it’s necessary to activate it, and we will go over them below.

A carbohydrate-rich diet with the consequent elevation of insulin levels, the availability of amino acids and IGF-1 activate this pathway, while calorie restriction (which we discussed extensively in other articles), a lower intake of amino acids, especially leucine and the aforementioned Rapamycin would inactivate it.

Over-activation of the mTOR pathway may lead to cancer, insulin resistance, diabetes, Alzheimer’s, and Parkinson’s, among other diseases (Saxton RA et al. 2017).

In relation to cancer, the mTOR pathway is complex:

As for its relationship with Alzheimer’s and Parkinson’s, the formation of protein agglomeration typical of these diseases (neurofibrillary tangles and B-amyloid plaques) is favored by the activation of mTOR, as it leads to the formation of proteins and inhibits autophagy (which is the mechanism by which the cell would “recycle” protein agglomeration).

So what can be good about mTOR based on the above?

Activating this pathway in certain situations or moments is very beneficial, as well. We need to have tissue creation and muscle synthesis to repair and develop muscle after exercise, so as not to lose muscle mass over the years (sarcopenia), to heal after injuries or surgical interventions, etc.

This pathway acts more like an energy sensor in our body. It detects when we have ATP deficiency (our energy currency) and sets into motion the mechanisms to get it back through the oxidation of fatty acids in muscle and liver, improving insulin resistance and glucose entry into the muscle, inhibiting triglyceride synthesis, cholesterol, and the accumulation of fat in adipocytes, etc. (Lin SC et al. 2018). 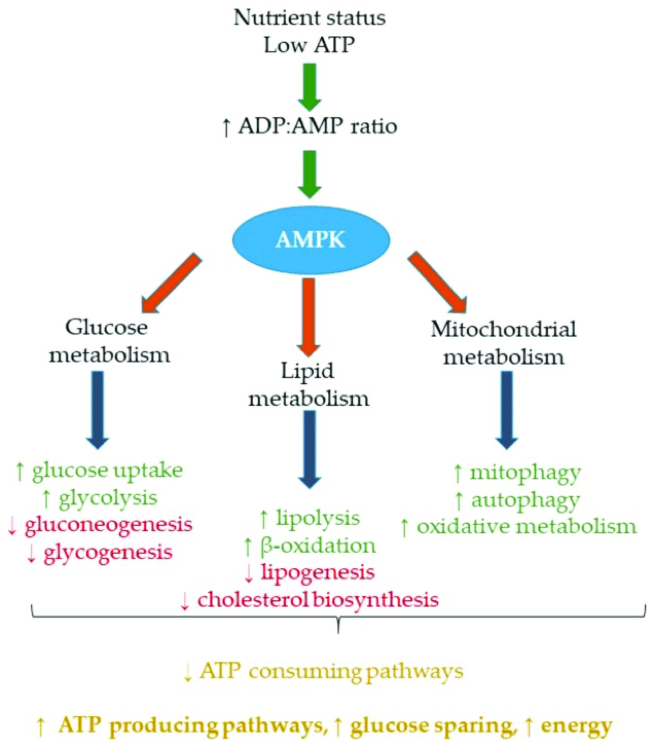 What activates the AMPk pathway?

The effects of the activation of this pathway are numerous, very important, and varied, as we have already mentioned.

Therefore, much remains to be investigated and discovered in this very important area. It does seem very promising in the treatment of this enormous scourge that is cancer.

And now we close this first part of the explanation of these interesting metabolic pathways. In the second part, we will propose ways to balance them to have the best of both and avoid the negative effects of either the activation or inhibition of each.