“The fight against ageing and death starts with you”

The suggestive title of the XXXV Memorial Lesson of the Fernández-Cruz Foundation refers to the proactivity of the so-called 4Ps Medicine or MP4.

The conclusions of eminent physicians such as Dr. López-Otín or Dr. Gabriel included, amongst others, caloric restriction, metformin, resveratrol, maintenance of a systolic blood pressure below 120 mmHg and an LDL cholesterol below 100 mg/dL, carbohydrate metabolism biomarkers which reflect levels of excellence and addressing diseases during the subclinical phase…that is to say, the measures we at Neolife practice everyday, assisted by the most avant-garde advances in science.

Once again the prestigious Memorial Lesson of the Fernández-Cruz Foundation was held in the auditorium at the San Carlos Clinical Hospital and once again the theme was wholly aligned to the spirit of Preventive, Proactive, Predictive and Personalized Medicine (MP4) that we carry out at Neolife.

The title, “The fight against ageing and death begins with you”, is a clear reference to the proactivity of medicine and the list of objectives for the event was similarly a declaration of intent to unite behind MP4: 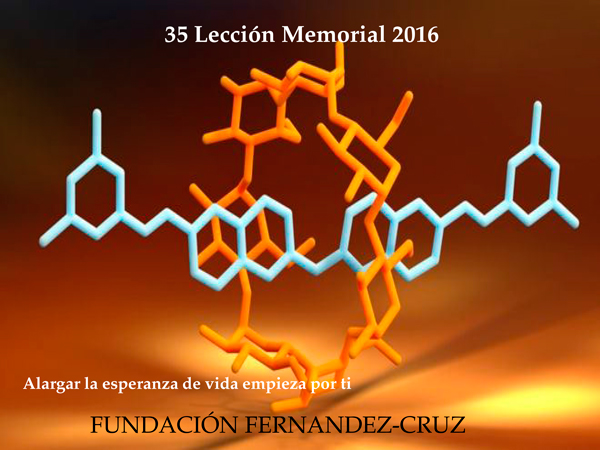 Dr. Carlos López-Otín (one of the best molecular biologists in the world) re-stated in his lecture entitled “Strategies for longevity in the genomic era”, his conclusion from one of his last publications in the Cell journal titled “Metabolic Control of Longevity”.

Over the years the metabolic functions of our body are altered, which results in decreased functional abilities. You could say that there is a “metabolic clock” which has a spent battery. Each of the 9 causes of cellular ageing described by the same author in 2013 are affected by metabolic disorders on which it is possible for us to act, since we know that certain genes are related to extended longevity, as well as certain congenital defects that can trigger premature ageing. It is well known that modern lifestyles, including hypercaloric diets and the sedentary lifestyle are the source for many of these metabolic disorders, in addition there is scientific evidence that demonstrates we can take certain measures that could counteract the metabolic disorders responsible for triggering the ageing process. Among said actions, Dr. López-Otín pointed out the following:

Dr. Gabriel states that several small risk factors produce much more damage than a single major risk factor. From this we can determine that it is important to act during the subclinical phase of all diseases.

Dr. Rafael Gabriel, director of the Research Methodology Unit at La Paz Hospital, presented his lecture titled “Hypertensive diseases on the increase during the last 10 years. The SPRINT and HOPE-3 studies”. In this paper the following question was raised: What is the target level for blood pressure that we should reach? It is an approach wholly aligned with the concept of “values ​​of excellence” that we always look for in the MP4 approach. The conclusions of the SPRINT and HOPE-3 studies have been analyzed. The SPRINT study, published a year ago in the New England Journal of Medicine, observed that the morbidity and mortality in high cardiovascular risk patients who were treated aggressively in an attempt to lower their systolic blood pressure (SBP) below 120 mmHg was much lower than in those who were treated to lower their SBP below 140 mmHg. On the other hand, the HOPE-3 study did not reveal that there was any benefit to be gained from taking polypill (a combination of a low dose of rosuvastatin with an antihypertensive agent) versus conventional monotherapy using statins or antihypertensive agents separately. It is likely that the lack of efficacy demonstrated by polypill in the study was due to the fact that the goal of reducing an individual’s SBP in the HOPE-3 study was not as ambitious as in the SPRINT study.

Dr. Gabriel concluded his work with an interesting comment: several small risk factors produce much greater damage than a single major risk factor and acting on these small risk factors is much more efficient than waiting for them to become a single large risk factor. For example, pressure slightly high, glucose slightly high, cholesterol slightly high…all together are more dangerous than one of them being significantly elevated. Therefore, we must act during the subclinical phase of the disease and not demonize such behavior considering that it is a medicalization of the healthy patient promoted by the pharma industry (“You are not healthy, you are pre-sick”).

“New perspectives in the treatment of hypercholesterolemia in cardiovascular prevention and ageing” was the title of the conference held by Prof. Jesús Egido, professor of medicine and head of the Nephrology Department at the Jiménez Díaz Foundation. Despite a significant “anti-statins” movement, in the opinion of Prof. Egido, there should be a monument “to the Statins” in all hospitals for the amount of lives they have saved. However, currently statins are not the only alternative for those requiring a cholesterol-lowering treatment. Ezetimibe and the recent PCSK-9 inhibitors are very effective drugs used in combination with or as an alternative to statins. As is the case for blood pressure, the recent criteria which focuses on target figures for LDL-cholesterol (bad cholesterol) is “The lower is better” – “the lower, the better” – as presented in a recent editorial in the New England Journal of Medicine.

Dr. Hoslst, professor of biochemistry at the University of Copenhagen, presented his paper on the latest advances in the treatment of type 2 diabetes using incretins, molecule (hormone) regulators of gastrointestinal origin that are released into the bloodstream after ingestion of food and that stimulate pancreatic cells to release insulin and glucagon.

Caloric restriction, metformin, resveratrol, maintenance of a systolic blood pressure below 120 mmHg and an LDL cholesterol below 100 mg/dL, carbohydrate metabolism biomarkers which reflect levels of excellence and addressing diseases during the subclinical phase, are all actions that we at Neolife practice everyday thanks to the most avant-garde advances in science.