What does the future of Anti-Aging Medicine hold for us?

Age is the main risk factor for most of the chronic diseases that afflict us in that last third of our lives. The first step is to change our beliefs about aging.

Today there are already treatment plans that have been shown to reduce the occurrence of diseases and improve the expectancy for a life free of disease. The foundation of these is to work in an intensive and personalized way on four main factors: exercise, nutrition, advanced supplementation and hormonal optimization.

Aging is the real disease

While a few weeks ago we delved into the mechanisms that are behind aging, this time we will look at the possible solutions that are already being investigated, and that we will talk about (and hopefully benefit from) in the coming years.

As the mechanisms behind aging become known, new lines of research are being developed, which are beginning to yield results in experimental animals and more initially in humans.

One of the most frequently asked questions is whether we will be able to see all these advances in Anti-Aging . The striking headlines in the press classically refer to discoveries in basic science that often take years to reach humans (if indeed they succeed in doing so). The truth is that the distance between the headlines and real treatments is getting shorter and shorter, since the development of medical science (as well as many others) is forging ahead exponentially.

The unavoidable health challenge of the 21st century will be the prevention ofchronic diseases . Maintaining the current system, which is dedicated to treating and mitigating the consequences of chronic diseases, is unsustainable in the medium to long term.

Age is the main risk factor for most of the chronic diseases that afflict us in that last third of our lives. That is why working to prevent disease does not work as an approach, since we only gain time in which to develop another one.
It’s like battling with a many-headed mythological monster, but only one being.

The real disease isaging, the loss of our mechanisms for regulation and regeneration that causes diseases to appear in different places. What we have known as diseases are in many cases particular consequences of the same root problem.

This new conception leads us to two realities:

Although research in this field has only started recently and there are many fronts open, the importance of the challenge is making a host of institutions, universities, companies and entrepreneurs turn towards finding these solutions.

Not only are there many people and organizations researching in this field, but they are also supported by more and more powerful tools: 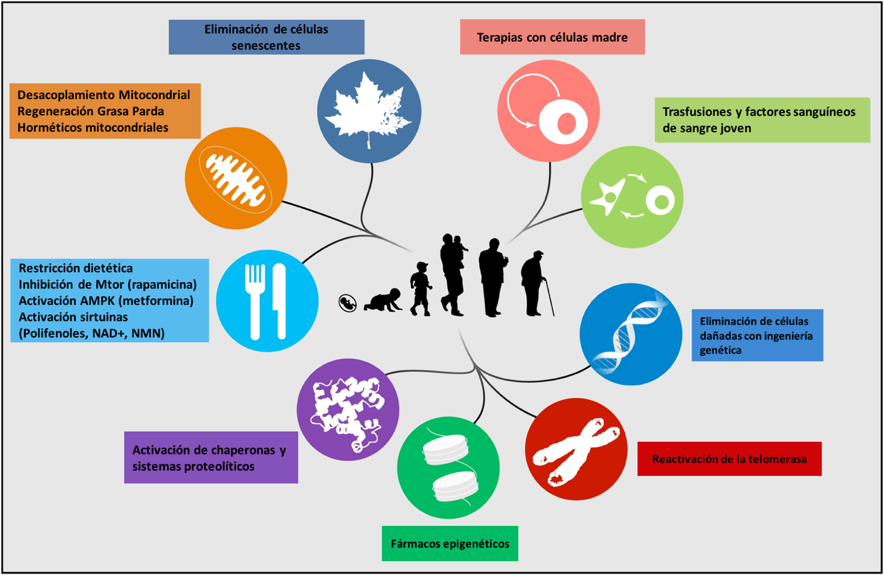 Below, we will present some of the lines of research and their importance:

Blood transfusions: although it seems like something rescued from Middle Ages, the truth is that if you give blood transfusions from younger individuals to older individuals, it has been shown in laboratory animals that this improves the functionality and structure of multiple tissues, including those of the heart and brain.
Apparently this is due to a whole series of stimulatory factors present in the blood, which researchers are trying to identify in order to be able to use them effectively and safely in humans.

Calorie Restriction: It has been known for years that in areas of the planet where less food is consumed, there are more centenarians. It is also recognized that, from yeasts to primates, all species live longer when the calories ingested are restricted by 30%, to the point of increasingLife Expectancy by the equivalent of 26 years in humans. Recently there have been several studies in which this effect is also seen in humans. It’s true that maintaining calorie restriction over time is very difficult, but there are patterns of diets and certain molecules that simulate this effect at the cellular level .

Molecules such asmetformin, rapamycin and its derivatives: have an effect on all the metabolic pathways with which our body relates to nutrients, and they are a very promising line of work which has already shown increased survival in laboratory animals and a reduction in the appearance of tumors.

Sirtuins: our body is well equipped with systems to repair the damage that the passage of time and exposure to risk factors inflicts on our cells. Sirtuins are the family of proteins that are responsible for repairing DNA; the problem is that this repair is very expensive in terms of energy, since they consume NAD+(2). As we get older, we have less and less quantities of this molecule. In the studies in which this system has been successfully stimulated, a delay in the appearance of thediseases associated with aging has been demonstrated. Different systems have been tried so far, the best known of which are polyphenols (3). The problem with polyphenols is that they are not powerful enough. We are currently investigating the supplementation of NAD + and NMN (4), with promising results.

Senolitics: one of the problems that cause tissues to devitalize is that old cells that are no longer able to perform their function do not self-destruct, as they are usually programmed to do. The accommodation of these malfunctioning cells means that the tissue does not work well and diseases appear. When these cells are eliminated from the tissue, this regenerates appreciably. Methods to safely remove these cells by usinggenetic engineering are being investigated, with positive results to date.

Telomerase: thetelomeres <2> are the ends of our chromosomes; They have a protective function and regulate the expression of these, but with eachcell division they are shortened. When they reach a critical point, the cells stop being able to divide and regenerate, which leads to the appearance of diseases. There is an enzyme that can lengthen them:telomerase. A drug has already been marketed,TA-65, which has shown some effect in repairing telomeres, although still with modest results (5). This line of work promises fascinating results and there are new molecules under study that are up to 1,000 times more powerful. Another way to activate this system is by incorporating a specially designed gene into the cells, which has recently shown – in studies led by the Dr. María Blasco – an increase of up to 20% in mice (6).

Stem cells: there has been widespread research in this field, and scientists have succeeded in converting normal cells into stem cells. There are already studies in which it has been shown that injecting these cells can help the heart recover after a heart attack. Future lines of research include regeneratingpancreatic beta cells (the curing ofdiabetes) and improving the immune status, joints, lungs, etc.

Mitochondrial uncoupling and brown fat: the mitochondria are the machinery that converts the nutrients we ingest into energy; mitochondrial uncoupling involves burning these nutrients without harnessing the energy, i.e. producing heat, which is an escape route for this excess of calories that we consume and that could have the beneficial effects of caloie restriction without the difficulty of its application. The regeneration of the brown fat that we all had in childhood and helped us maintain temperature, as well as different drugs that allow us to uncouple mitochondrial emitter functioning, are promising lines of work in this area.

Hormetics: the adequate maintenance capacity of the organism within its normal values ​​of temperature, blood pressure, glycemia, etc. (homeostasis), is gradually lost with age. A surprising discovery is that a low intensity harmful effect promotes a benefit, allowing the body to be more capable of regenerating and maintaining adequate levels. Researchers are studying how the stimuli of extreme temperatures, alterations in eating patterns, fasts and other factors can be of help.

Transplanting bioidentical organs: when our own organs have failed irremediably one option is a transplant. In the future, transplants will not have the limitation of availability of organs or their rejection, since the technology is being developed to grow bioidentical organs in animals with genetic engineering, or even “3D printing ” organs with stem cells.

The future is promising.

A large part ofbiomedicine is realizing that true medicine involves prevention, by correcting these mechanisms that are harmful to our organism. The speed at which scientific knowledge is advancing gives us reasons to hope that we can benefit from some of these remedies in the near future.

Maintaining a cutting-edge approach, understanding the future of this discipline and reviewing the news critically is part of the philosophy of Neolife. But we need to start working now. We cannot trust everything to the emergence of a hypothetical remedy that will allow us to live 30 years longer. We must focus on being in the best version of ourselves as soon as possible, in achieving and maintaining an excellent state of health that makes it possible to delay the onset of diseases.

The first step is to change our beliefs about aging. Aging is a “plastic” process that we can speed up or slow down. It is not immovable, but depends a lot on us. The second step is to be consistent with our desire to be better, to change our attitude and get going.

Today there are already treatment plans that have been shown to reduce the occurrence of diseases and improve the expectancy for a life free of disease. The foundation of these is to work in an intensive and personalized way on four main factors: exercise, nutrition, advanced supplementation andhormonal optimization. AtNeolife we base ourselves on a comprehensive, thorough and proactive assessment in order to create personalized health plans that help you to improve from the outset.

(1) Graphic in open access, courtesy of the journal Current Biology, extracted from the article “Ageing as a Risk Factor for Disease.”

(2) Hercules and the Hydra, A vase exhibited in the J. Paul Getty Museum, image in Wiquimedia Commons, creative commons license.

(3 ) Adapted from the open-access graphic courtesy of the journal Cell, extracted from the article “The Hallmarks of Aging”.