Erectile dysfunction is defined as the persistent inability to achieve or maintain an erection that allows for satisfactory sexual intercourse.

Having good testosterone levels is critical to having satisfactory erections, but there are many more factors involved. It can happen for vascular, neurogenic, anatomical, hormonal, drug-induced or psychogenic reasons. In many cases more than one cause is to blame.

Erectile dysfunction (ED) is defined as the persistent inability to achieve or maintain an erection that allows for satisfactory sexual intercourse.

To better understand the causes that can lead to erectile dysfunction, we’re going to look at what phenomena must occur for a man to have a satisfactory erection. 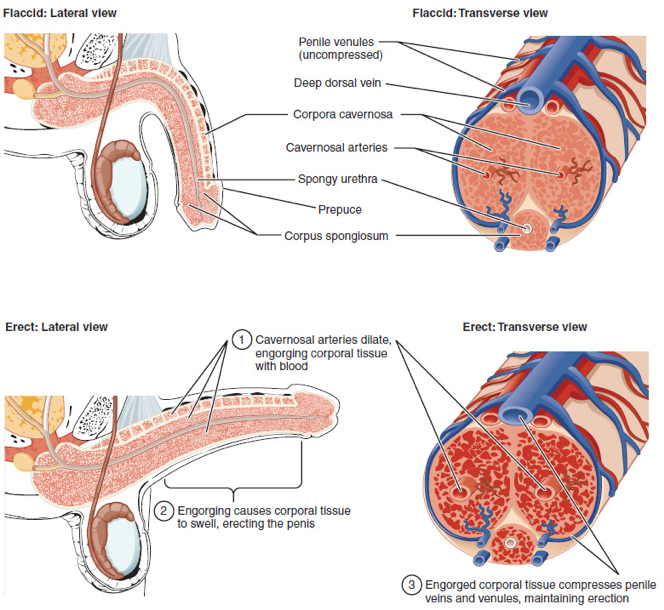 An erection occurs when 2 tubular structures, the corpora cavernosa that run all the way through the penis and the corpus spongiosum containing the urethra, fill with blood. This can occur due to a series of physiological stimuli such as arousal and sexual stimulation, processes with a strong hormonal influence, especially testosterone.

In the presence of mechanical stimulation, the erection is initiated by the parasympathetic nervous system (a division of the autonomic, unconscious or voluntary, nervous system). These parasympathetic nerve branches range from the sacral plexus to the arteries that reach the erectile tissue. When stimulated, acetylcholine is secreted, which causes the release of nitric oxide, a vasodilator agent. Thus the arteries dilate and fill the corpora cavernosa with blood.

The next step is preventing that blood from receding. The ischiocavernosus and bulbous muscles compress the veins, preventing the blood from being drained. After ejaculation or the cessation of stimulation, parasympathetic stimulation disappears and the blood leaves the corpora cavernosa through the venous system.

The cerebral cortex, i.e. our superior, more advanced brain functions, can initiate erection in the absence of stimulation in response to visual stimuli, olfactory stimuli, imagination, etc. They operate through erection centers in the sacral and lumbar regions of the spinal cord. Moreover, the cerebral cortex can suppress erection, even in the presence of mechanical stimulation, as can other environmental, psychological or emotional factors.

Erection can also occur spontaneously at night, in a process that is believed to be mediated by the brainstem during the REM sleep phase and is thought to be a form of “maintaining” the proper health of our erections. The presence or not of these nocturnal erections has diagnostic value.

In view of this, we can understand the large number of mechanisms required for an erection to occur and the large number of steps at which it can fail. Erectile dysfunction can occur for vascular, neurogenic, anatomical, hormonal, drug-induced or psychogenic reasons. In many cases more than one cause is to blame.

The study can be completed with more specific tests such as the doppler ultrasound of the penis with provocation tests or nocturnal tumescence testing. This test is important because if the patient is able to have erections at night we can assume that the vascular and neurological mechanisms are working and the cause is more likely psychogenic.

What can be done?

Treatment will ideally be aimed at correcting the suspected cause of erectile dysfunction. It is based on hygienic-dietary measures and modification of habits, pharmacological measures, physical therapy and finally surgical therapies to restore flow or implantation of prostheses.

And perhaps in a class of its own, straddling the line between lifestyle changes and pharmacology, is the hormone replacement therapy with bioidentical hormone that we have developed at Neolife. This therapy is very helpful and is primarily aimed at achieving adequate physiological levels of DHEA and testosterone. The Massachusetts Male Aging Study looked at the correlation of 17 hormones and erectile dysfunction and found that only DHEA had a negative relationship (i.e. greater dysfunction at lower levels). This led researchers to study its effect on this pathology in detail. Reiter et al. showed improvements in erectile dysfunction, satisfaction during coitus, sexual desire and orgasmic function after 16 weeks of use (3). Meanwhile, treating male hypogonadism by replenishing testosterone levels has been shown in several recent meta-analyses to improve erectile function, sexual desire and orgasmic function (4).

The conclusion that we want to convey here at Neolife is that erectile dysfunction is a multi-factor clinical picture that must be evaluated and treated from multiple axes, hormonal therapy being a very important one, but still just one of them.