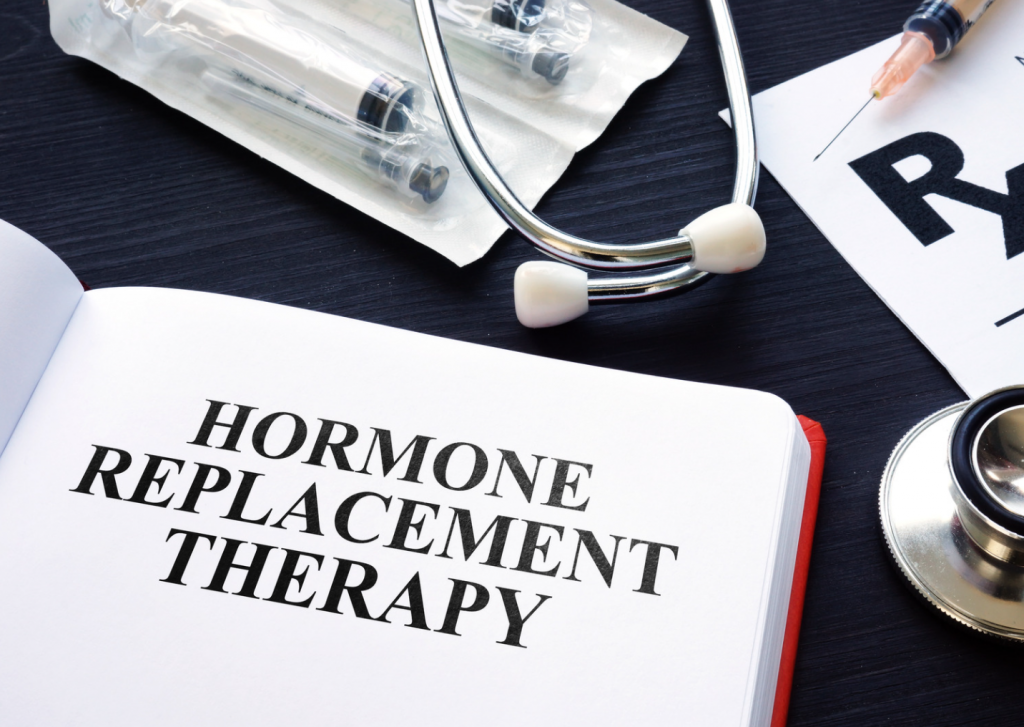 A meta-analysis concludes that not only does the use of HRT not lead to an increased risk of cancer recurrence in breast cancer survivors but also leads to a significant decrease in mortality from all causes (3% vs 11.4%).

The use of chemotherapy has a cytotoxic effect on the ovaries, resulting in premature ovarian failure in between 20% and 80% of women, which leads to a deficiency in sex hormones. Moreover, the use of antiestrogenic drugs and aromatase inhibitors worsens the hormone deficiency and leads to symptoms that make about 50% of women suspend their tamoxifen treatment.

If there is one thing us doctors should do is to learn, unlearn, and relearn. We are obliged to be aware of the new evidence that scientific literature presents, even if this goes against what we have been previously taught.

In Part 1 of this article, we discussed the relationship between HRT and breast cancer, and the safety of the use of Hormone Replacement Therapy with bioidentical hormones. Now we will ask ourselves what does the literature say about its use in patients who are breast cancer survivors?

It is difficult to find literature in this regard due to different factors. One is, of course, that due to the fear of “causing cancer” with HRT, which we already know is unjustified as mentioned in Part I of this article, there are not many studies available, and much of them have been done on women who, due to the effects of chemotherapy or treatment with estrogen receptor inhibitors, such as tamoxifen, present intolerable symptoms of estrogen deficiency, like hot flashes, above all.

The other factor is, as we also discussed in our previous post, the enormous confusion created by studies when they group under the term “estrogen” the synthetic kind, like conjugated equine estrogens (CEE), and the bioidentical kind (estradiol), and under the term “progestogen” all those drugs with progestogenic effects and which act on progesterone (PR) receptors without distinguishing between progestins (synthetic derivatives) and bioidentical progesterone.

This distinction, which they rarely make, is vital as we have explained in multiple articles, since the effects of synthetic progestins and estrogens are radically different from those compounds that occur naturally in a woman’s body, especially in their link to the development or, in this case, recurrence of cancer.

Breast cancer accounts for 30% of cancers diagnosed in women in Spain. Its incidence is estimated at 1 in 8 women (13%). The peak of incidence is between the ages of 45 and 65. In the group of women diagnosed later (>50 years), the presence of cancer with positive hormone receptors is much more likely.

It is not the goal of this article to delve into the causes and different classifications or treatments according to stages.

For the purpose of this article, we would like to note that the use of chemotherapy has a cytotoxic effect on the ovaries, resulting in premature ovarian failure in between 20% and 80% of women, which leads to a deficiency in sex hormones. Moreover, the use of antiestrogenic drugs and aromatase inhibitors worsens the hormone deficiency and leads to symptoms that make about 50% of women suspend their tamoxifen treatment.

Therefore, if for the purposes of treatment, we consider the age at which the pathology usually occurs, we find that a large number of women will have a deficiency in sex hormones, either due to menopause or the prescribed treatments.

The deterioration of quality of life associated with this is very important, not only due to physical symptoms like hot flashes, urogenital, or psychological symptoms, it also leads to osteoporosis, cardiovascular disease, and cognitive decline among many other things.

So, what do we do with these women? Do we have to deny them Hormone Replacement Therapy (HRT), that would be so beneficial to them, because they had breast cancer?

Let’s see what the available scientific literature and basic science have to say.

Meurer et al. completed a meta-analysis that concluded that not only does the use of HRT not lead to an increased risk of cancer recurrence in breast cancer survivors but also leads to a significant decrease in mortality from all causes (3% vs 11.4%).

Batur et al. demonstrated similar results with a lower risk of death associated with breast cancer in women using HRT with a 50% reduction in the risk of recurrence.

Randomized clinical trials (RCTs) showed mixed results, with some mentioning a higher, while others a lower risk. The reasons for these differences may be varied (different ages, types of tumors, different follow-up times, etc.) but above all it is the various types HRTs used. Most of them used synthetic estrogens and synthetic derivatives of progesterone, progestins like medroxyprogesterone acetate-MPA, which we already know since the publication of the WHI Study, widely mentioned in these texts, which are associated with breast cancer and thromboembolic disease.

If we delve a little deeper and look at the interventions made in these RCTs and select the studies that used bioidentical hormones, we get very interesting results.

The study conducted by Natrajan et al. using bioidentical estradiol and testosterone in pellets and usually with megestrol as a progestogen, showed that there was no increase in recurrences or mortality associated with breast cancer. The use of bioidentical estradiol and a progestin like megestrol, which the literature tells us does not have an association with cancer like others such as the aforementioned MPA, levonorgestrel or NETA (norethisterone acetate), may be the reason for these good results.

The study conducted by Fahlen et al. and published in the European Journal of Cancer, decided to continue the Stockholm trial that had studied women receiving estradiol and MPA and which was stopped abruptly in light of the results of the HABITS study. The HABITS study was stopped because they observed an increase in breast cancer recurrence in women using HRT consistent with estrogens with NETA or estrogen alone without progestogen opposition. At the moment it was suspended, the Stockholm trial had not shown an increase in recurrences after 4 years of follow-up. Fahlen continued the study until its year 10, lowering the dose of the progestin used, MPA and maintaining oral estradiol. The result? No significant differences were found between the two groups in terms of mortality or recurrence.

Finally, I will mention the study conducted by Le Ray et al. in which they applied local transdermal estradiol in women with symptoms of vaginal dryness associated with their treatment. They did not observe a higher risk of recurrences in any of the groups (treated with tamoxifen, aromatase inhibitors or only local estradiol).

The basic science that studies how hormone receptors behave in normal breast cells and in cancer cells gives us some important clues as to what all these studies mean.

Years of research have revealed a complex and sometimes functionally contradictory connection between estrogen receptors (ER) and progesterone receptors (PR) and breast cancer. There seems to be a clear difference in tissue response to the presence of estradiol and progesterone between normal breast cells and cancer cells. While in healthy tissue, they lead to the proliferation of ER- and PR- milk-producing cells; in cancer cells (much richer in ER+ and PR+ cells), these will be the cells that proliferate in the presence of estrogen with progesterone, thus leading to an antiproliferative effect. 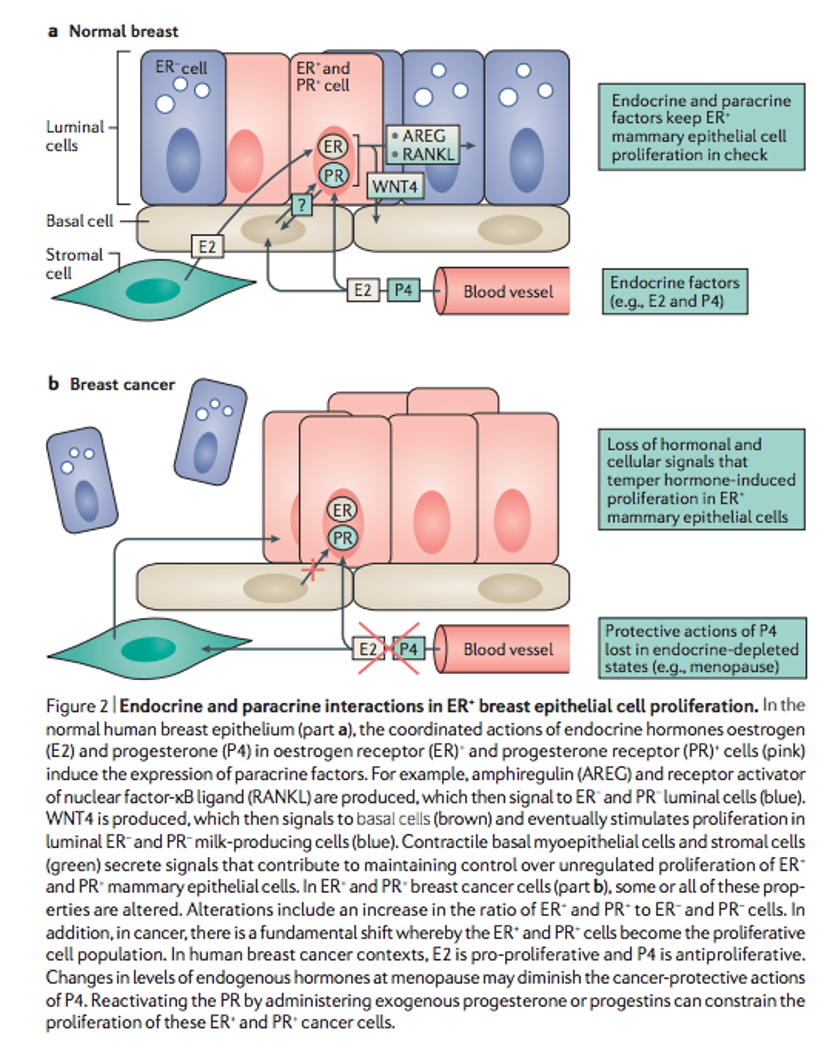 A recurrent observation is that, in breast cancer cases with ER+, PR agonists present a clinical benefit, a conclusion supported by the abundance of clinical data showing the efficacy of progesterone treatment in this disease. By exploiting this interaction between the activation of both receptors, we find a unique opportunity for the treatment of breast cancer with positive hormone receptors. Its use with agents that connect to the ER seems more effective. 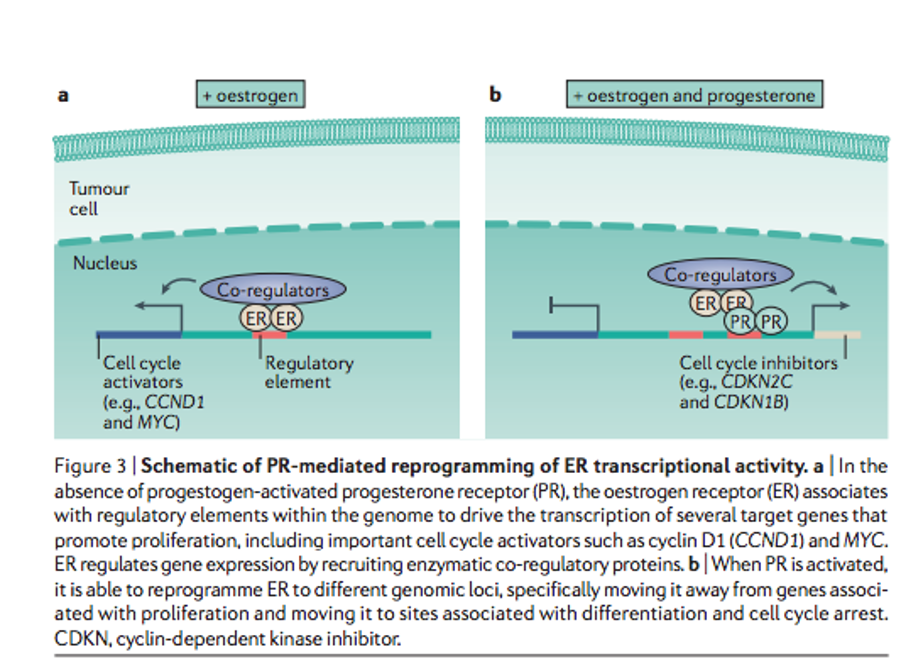 When only estrogen receptors (ER) are activated, a stimulus is produced for the transcription of factors that lead to an increase in cell proliferation. While if progesterone receptors are activated at the same time, the genes on which the ER act are reprogrammed, thus increasing the expression of genes, which stops the cell cycle and growth.

The observation that postmenopausal women with PR+ tumors have better prognosis, while postmenopausal women do not, is explained by the presence of an ovary still producing progesterone in the former and not in the latter, who must receive an exogenous progestogen to obtain some clinical benefit.

Therefore, and in conclusion, the available scientific evidence would support the use of HRT with bioidentical hormones in breast cancer survivors as long as this includes the use of progesterone, of course. What about tumors that express hormone receptors (ER + PR+)? The answer may be the same. In fact, the studies I mentioned – and some I have not mentioned – that have shown benefits in recurrence in their results reported including tumors with ER+. It seems more than clear, from the above, that progesterone is not only safe but could be an essential component of the treatment, especially in women with non-tamoxifen-responsive active cancers. Can estradiol be the bond to estrogen receptors that is required for progesterone to exert its anticancer effect? Is all we actually need simply “something” to bond to the ER that is initially an antagonist like tamoxifen or an agonist like estradiol? That would be a very interesting clinical trial and very important for women being treated forbreast cancer with positive receptors, since the difference in their quality of life, after receiving one or the other compound can be very different. What is clear is that we must rethink very seriously the somewhat simplistic idea that ER is activated with estradiol and inhibited with tamoxifen. What happens once “something” bonds with the receptor is much more complex than we thought and may be the answer to explain the different post-cancer evolutions.