If testosterone is beneficial, why isn’t it generally used? (Part 3 of 3)

It’s normal to view cases where an effective therapy is not widely supported and used in the entire medical community as nonsense. First, there is an barrage of pre-conceived notions about what is normal to suffer with age, and second, there is a great deal of ignorance among professionals in this field.

As doctors we usually rely on scientific evidence to settle debates and doubts about issues like this. Ignorance often makes studies with these hormones flawed in their design and interpretation of results; this occurs, for example, in studies that use insufficient doses of hormones, ones that use non-bioidentical hormones or administer them incorrectly, and studies in which hormones are used to try to solve non-hormonal issues.

One of the keys to the success of hormone replacement is giving the specific dose for each individual, which varies significantly from person to person.

We have already discussed in this series of posts more general issues that limit the use of testosterone, such as the conception of normalcy regarding aging, myths, reactive medicine, etc. (part 1 and part 2).

In this last installment of the series we’ll zero-in on the causes that solely concern professionals when prescribing testosterone: knowing how to handle hormones and understanding the scientific literature on them.

There’s a lack of expertise about diagnosing and prescribing hormone replacement.

Hormone replacement is more complex than other treatments, and although a reductionist approach (one or two treatments with a standard dose for everyone) has traditionally been taken, the truth is that doing it well requires comprehensive training. The key is to follow two rules that, although they appear simple on the surface, are not quite so for reasons we’ll look at now.

Why isn’t there sufficient training in using the right hormones?

In addition to the lack of interest of the medical/scientific group until recently and myths surrounding these treatments, we must consider the current model of dissemination of medical knowledge and the ongoing training of professionals in use today.

Far from conspiracy theories, like those that say “doctors/the industry want patients to have chronic illnesses…”, the fact is that the pharmaceutical industry plays an extremely important role in the training of physicians. Whether it’s due to lack of government interest, habit or lack of rigor, the pharmaceutical industry remains a protagonist or preferential ally in all (or almost all) educational activities. Obviously, this industry responds to more or less obvious marketing interests, and the truth is that bioidentical hormones can’t be patented and don’t offer the same economic yields as other drugs. As a result there has been less investment in research around these treatments, physicians receiving less training in the use thereof, and worse: erroneous training to encourage other treatments that were less effective or safe but that could indeed be patented (for example, classic hormonal therapy in menopausal women using hormonal derivatives for years, which now proves to have more side effects than bioidentical hormones).

Thus, physicians are generally not trained in diagnosis and treatment with bioidentical hormones.

And is it that difficult?

One of the keys to the success of hormone replacement is giving the specific dose for each individual, which varies significantly from person to person.

No one would expect the dosage for treatment of a patient with hypothyroidism (thyroid hormone deficiency disease) to be the same in all patients. And yet we see with a certain degree of naturalness menopausal women being given a patch with the same dose for all, or studies where all men with a testosterone defect are given a standard dose, which is fairly low in most cases.

The appropriate adjustment of optimal doses is complex and requires training and experience; without these we are doomed to continue with the approach of “same dose for everyone”, which has already shown us not to work. It is not that hormones are problematic (our bodies were doing perfectly well with them until we lost them): the problem is managing them.

As doctors we usually rely on scientific evidence to settle debates and doubts about issues like this. But it’s important to read the studies carefully and critically. The kind of ignorance previously discussed (and often other interests) make studies with these hormones flawed in their design and in the interpretation of the results.

Specifically, the failures most frequently found when reviewing the scientific evidence are:

Let’s look at the example of this recent review of testosterone. It lists different studies with testosterone given in a skin-absorbing gel for gaining muscle mass, enhanced libido or sexual function and loss of visceral fat.

The “outcome” column details the studies in which positive results were obtained (green mark) and those in which there was no benefit obtained or even harm (red mark). 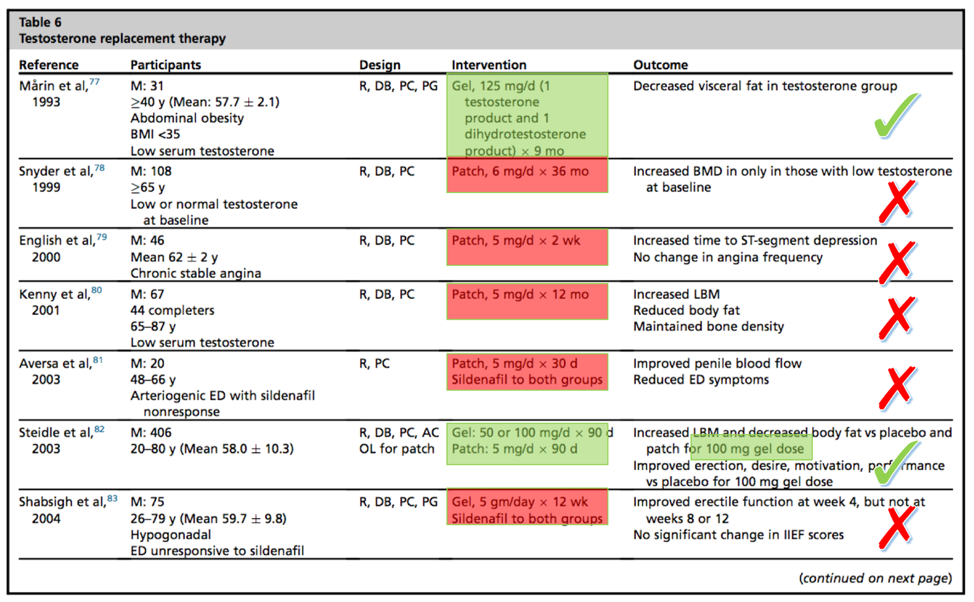 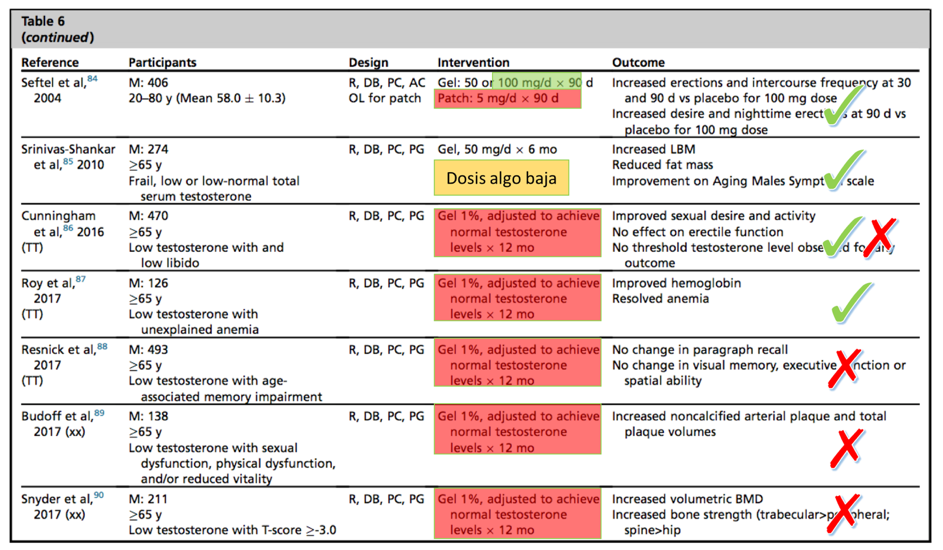 As you can see, when the testosterone is used well it works, and when it isn’t… it doesn’t. It’s even detrimental to leave patients with less testosterone than they had before!

It’s normal to view a case where an effective therapy is not widely supported and used in the entire medical community as nonsense.  First, there is a barrage of pre-conceived notions about what is normal to suffer with age, and second, there is a great deal of ignorance among professionals, combined with the particular interests of the pharmaceutical industry. All of this is often backed by poorly designed and subsequently misinterpreted studies.

Bioidentical hormonal replacement is not a “cure-all” that will magically rejuvenate us. It’s simply another tool to incorporate in modern preventive medicine. In our experience, it allows us to improve the performance of diet and exercise at the muscular-metabolic level and achieves improved mood and quality of life. We believe that, in expert hands, it is one of the drivers of aging we can act on today.

In Neolife we incorporate bioidentical hormone replacement in our global health and health optimization programs when the situation requires it, monitoring and adjusting to find what Americans call each patient’s “sweet spot*”, achieving effectiveness and minimizing side effects.

(* = in reference to optimal hormonal levels)