If testosterone is indeed beneficial, why is it not in widespread use? (Part 2 of 3)

Classically, medicine has refrained from intervening, indicating that we must accept certain limitations that age imposes on us and considering this deterioration as something normal.

Some will say that this seeking to be optimal is not a question of health, but rather of “doping” or a “flight forward”, but make no mistake, no one is talking here about participating in an Olympics… We’re talking about aging with a good quality of life. In addition, there are myths in classical culture that have an impact on prejudices and trends when it comes to learning to diagnose and treat hormonal deficits, dismissing them without knowing the scientific evidence behind the treatment.

In this series of articles we are reviewing the different reasons why the use of testosterone is not widespread despite showing benefits in numerous studies.

In the first part of this article we talked about the progressive decline in hormone values​​ in both men and women with age, and how their replacement led to improvement on several levels (metabolic, vitality, muscle mass, etc.). Also in the previous issue we commented on the consequence of not considering aging to be a disease, and that of the reactive approach adopted by medicine, in contributing to the use of testosterone not becoming more widespread.

In this new issue we’ll examine the importance of understanding the difference between the normal and the ideal in medicine, as well as the role played by the myths that surround hormones, both in the general population and among doctors.

Biology and medicine look for reference levels in the population for eachbiomarker (height, fasting glucose, vitamin D levels, etc.). Each variable we measure tends to group naturally around central values ​​in what we call a “normality curve“. Classically speaking, an interval around the mean, approximately 70% central, is considered normal.

As we age, our comparison group changes, so the hormone levels or bone density of a 55-year-old person can be much worse than the ones he had at 35 years of age and still be considered “normal”.

We’re condemned to deteriorate due to the very way we define normal values!

This apparent normality means that we don’t feel the urgency to change, and we’re content to be within “normal” values, while we deteriorate little by little.

Our calm complacency is only broken when we meet people who, by training and taking care of themselves, or by being particularly balanced at a hormonal level, show us that there is another way to age,with a much better physical and mental condition, which should be the normal one.

Exercise and diet always work. There are studies, even in people in their nineties, that show that, with the right stimuli, the body always responds.

There is increasing scientific evidence pointing to the benefit of replenishing our hormones. To demonstrate this, we will comment on a real case from Neolife:

The “normal” thing is to lose bone density over the years, right? Perhaps some lucky ones may keep their bone, but… gaining bone over the years?

In the graph we can see how, over the years, with adequate supplementation, hormone replacement, diet and exercise, this patient is strengthening his bones. 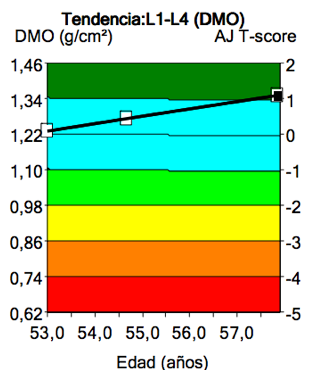 Classically, medicine has refrained from intervening, indicating that we have to accept certain limitations that age imposes on us, and considering this deterioration as something normal. Some will say that this seeking to be optimal is not a question of health, but rather of “doping” or a “flight forward”, but make no mistake, no one is talking here about participating in an Olympics… We’re talking about being able to continue playing tennis at 60, being able to go out on the streets and have a social life at 70-80 or having the strength to live independently into our 90s. We’re talking about aging with a good quality of life. Are we really going to avoid using a tool that has been shown to be effective and safe when used correctly?

The myths (in general culture… and also among doctors)

Hormones, and specifically testosterone, have acquired a bad reputation. This is mainly due to the fact that side effects from other types of treatment have been attributed to it, for example:

These myths have an impact on prejudices and tendencies when learning to diagnose and treat these relative hormone deficits, both in lay people and in professionals, who often reject it without knowing the scientific evidence behind the treatment.

In short, two of the factors that prevent the correct use of testosterone becoming widespread:

In the final chapter of this series we will discuss two other factors, in this case those that are purely in the medical field: the lack of medical expertise in the management of hormones to improve patients, and low-quality clinical studies which are subsequently misinterpreted.