During October we have witnessed a number of significant advances in the field of anti-ageing medicine.

The presentation from the Nobel Prize winner Elisabeth Blackburn, the first instance of gene therapy activating telomerase in humans and the further progression of the study carried out in relation to the nutritional supplement TA-65, which determines the average lengthening of the telomere, are just a few examples of the most recent advances.

The Nobel Prize in Medicine winner, Elisabeth Blackburn, presented a keynote speech on longevity in Madrid, based on her research into telomeres.

In October the XXXIV Informative Lecture from the Fernández-Cruz Foundation(1) took place, an event of the highest scientific caliber led by Prof. Arturo Fernández-Cruz each year. During the conference a number of scientific papers are presented before a keynote speech is delivered by a renowned researcher. Last year the title of the event was “How to get to your centennial, more years, more life, have fun” and the keynote speech was delivered by Prof. Carlos López Otín (see article “Healthy Longevity, a trending topic”). This year the title is “Moving the frontiers to stay healthy and achieve immortality?” and the keynote speech is delivered by none other than 2009 Nobel Laureate in Medicine, Elisabeth Blackburn. Professor Blackburn received the Nobel Prize along with Carol Greiger and Jack Szostak for their research into telomere biology and the relationship telomeres have to the cellular processes of ageing and cancer.

At the same time we have recently learnt of the existence of a new company called Bioviva-Science, whose objective is the development and application of advanced therapies that reverse cellular and tissue ageing. Furthermore, throughout this month we received advance access to the results from the double blind study into the effects of a known nutritional supplement, TA-65, on the length of telomeres.

Lots of exciting information accumulated in as little as a single month. 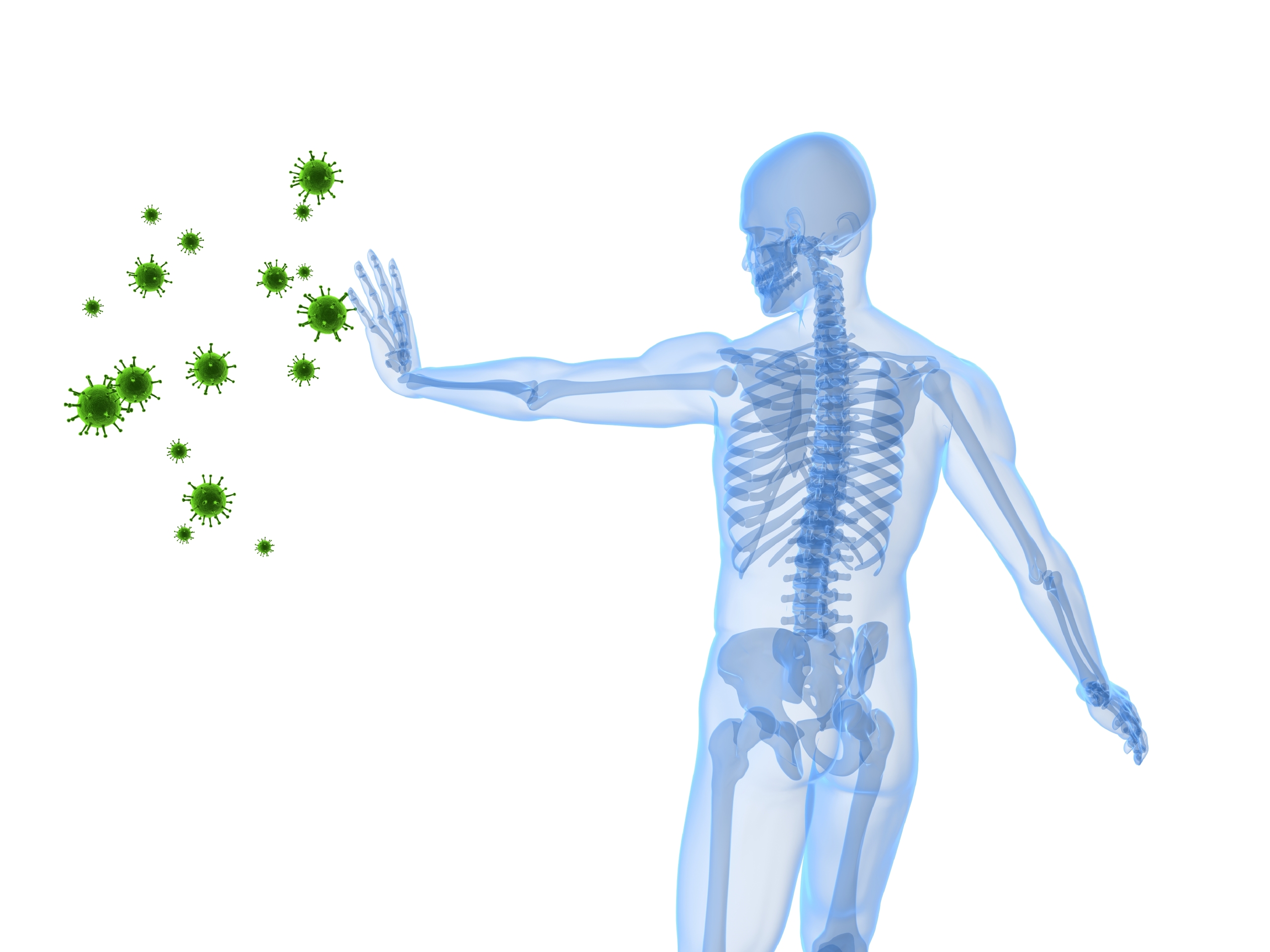 The presentation from Dr. Blackburn discussed the role of telomeres in the development of diseases often associated with the ageing process. She included a developmental overview of her discoveries and presented the details from her now well-known studies into telomere length in samples of more than 100,000 patients by age groups. Dr. Blackburn also alluded to the effect of stress and depression on the length of telomeres in the body. But perhaps what drew the most attention from the audience was her conservative attitude in regards to what actions we could implement now to prevent the shortening of telomeres or, in her example, reverse the process. Blackburn is in favor of taking action at a lifestyle level such as modifying nutritional behavior, exercise habits or stress levels, but she remains against using specific measures to activate telomerase, either through use of nutritional supplements, drugs or gene therapy. Although a longer telomere correlates with better cardiovascular health and a lower incidence of cancer in general terms, some tumor types occur with greater frequency in people with long telomeres. This is what, in Blackburn’s opinion, limits her interest in such techniques.

The closing lecture of the XXXIV Master Class was given by Dr. María Blasco, director of the CNIO (National Centre for Oncological Research). Her presentation focused on the latest publications from her team and their work on gene therapy in mice, which related to diseases that fall within the category of so-called telomeric syndromes. The telomeric syndromes or telomeropathies are diseases which have a bleak prognosis such as aplastic anemia, congenital dyskeratosis or cystic pulmonary fibrosis, which are characterized by telomere shortening. One of the working hypotheses for curing these diseases is the lengthening of telomeres by activating telomerase using gene therapy and a course of inoculations with an AAV vector (Adeno-Associated Virus) which would contain the telomerase activating gene. The results from the mice study are encouraging, but we are still waiting for the first clinical trials to be conducted using humans in relation to any of these telomeric syndromes.

The fact remains that this type of gene therapy is the closest thing that is currently understood that can be used as a genuine treatment for cellular ageing and, therefore, a single treatment for all diseases related to the ageing process. And this is naturally related to the recent appearance of the company Bioviva-Sciences, which we highlighted at the beginning of this article.

Bioviva-Sciences, a transgressive company in search of longevity through gene therapy.

Our first surprise when delving into the Bioviva-Sciences website is the composition of their team and their advisory committee. There are several of the most renowned “longevityists”, such as David Kekich, Mark Rosenberg, Bill Andrews and Aubrey de Gray. Our second surprise is the directness with which they approach ageing as the main cause of diseases and their subsequent treatment at a cellular and tissue level. They do not hide behind anything – they simply place their cards on the table. We know of several studies that have achieved reverse ageing at a cellular level in mice, including the studies conducted by Dr. María Blasco, but few dare to hypothesize about the realization of the same experiments in humans, with the sole objective of reversing the ageing process. Bioviva-Sciences not only describes the scientific theories of ageing and their possible approaches, notably at the level of telomeres, but also explains from an ethical standpoint why ageing should be treated and encourages others to take action by seeking candidates who are willing to alter their telomeres through genetic modification.

Gene therapy, like regenerative therapy with stem cells, is not allowed in a clinical setting…at least for now. Such measures can only be carried out during clinical trials. One year ago Prof. Carlos López Otín explained that there were only a few hundred patients in the world undergoing gene therapy as part of the approved clinical trials around the world. He commented at the time that if a clinical trial of gene therapy was approved for patients of the so-called Telomeric Syndromes (aplastic anemia, pulmonary fibrosis, dyskeratosis congenita etc.) then we would be closer to a genuine treatment against ageing. This genuine anti-ageing treatment is designed to activate the telomerase in a reversible or transitory way through gene therapy (see PDF of the paper “The Origin of the Disease”.

Bioviva-Sciences wants to undertake this right now, outside of a clinical trial and by-pass the present US regulations. It is for this reason that they are “offshore” and not within the country. In fact on their website they say that they have already carried out the treatment on one person at the end of last month (September 2015) and if the reader pays careful attention online they may realize that the person who has inoculated with the virus containing the telomerase gene is the company’s own CEO, Elisabeth Parrish.

Michael Fossel (another of the famous “longevityists”) is embarking on a similar project, called Telocyte, which has the same goal, but which aims to obtain FDA approval and, therefore, their steps are more measured and prudent than the former. Nevertheless, Fossel applauds Parrish’s courage to overcome the administrative restrictions. We were able to ask Maria Blasco directly about this matter: she was aware of the development and surprised as everyone else how this will alter the course of developments in this area.

Now we must wait to see what happens at the 5, 8 and 12 month check-ups (post inoculation with the gene). What will Elizabeth Parrish discover…Exciting!

The first study on TA-65, the so-called “elixir of youth”, seems to yield positive results and appears to reveal that TA-65 lengthens telomeres.

The third news-worthy item we draw your attention to is the advances made in respect of the double-blind study into the effect of the nutritional supplement TA-65 on telomere length (see article on the blog about telomeres). There are several scientific publications which discuss this compound (2,3,4), some of them authored by María Blasco as co-author, but no research to date has shown the lengthening of telomeres in humans. It seems that the group of patients who took the TA-65 supplement achieved an average lengthening of their telomere length of 0.533 Kb, compared to an average shortening of 0.288 Kb in the placebo group. We are awaiting the publication of these results in the respective scientific journals. If this is the case and said effect is confirmed (without the appearance of any side effects), we would be on the cusp of another great discovery in anti-ageing medicine. 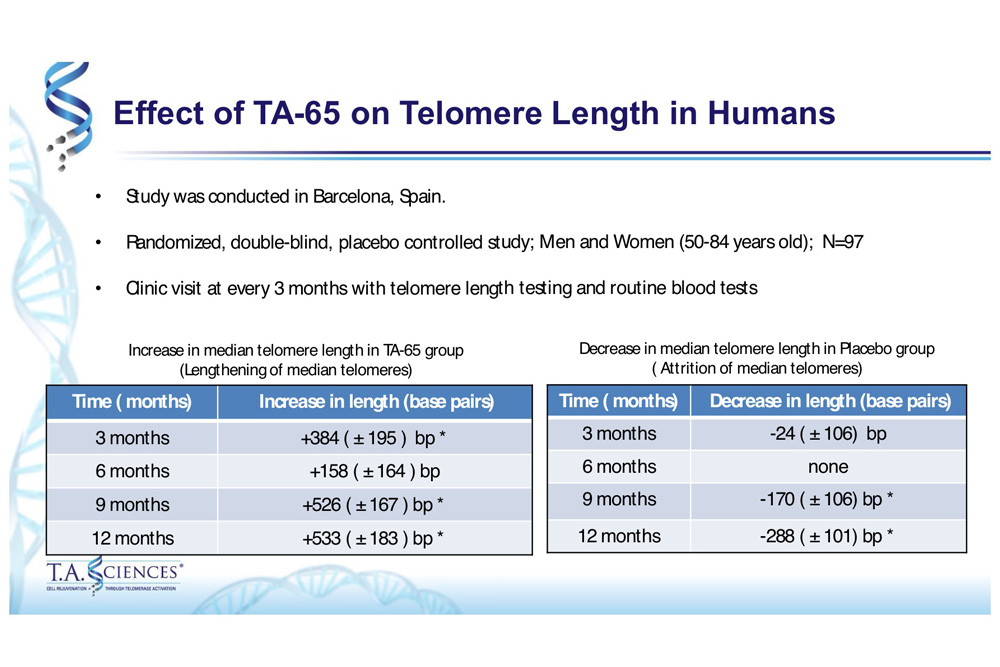