What NAD is and Why You Should Care About It

NAD or nicotinamide adenine dinucleotide is a derivative of vitamin B3, also known as niacin, niacinamide or nicotinamide (soluble form). NAD is used in over 500 reactions and has a crucial role in metabolism, cellular aging, DNA repair, and gene expression.

Without the presence of NAD, much of the reactions that protect us from pathologies related to aging do not occur, we accumulate damage… and eventually we die.

Today I want to share information with you about a very important molecule that we have in our bodies, of which you’ve probably never heard of. It is NAD or nicotinamide adenine dinucleotide, which is a derivative of something that we’re already familiar with, vitamin B3, also known as niacin, niacinamide or nicotinamide (soluble form). NAD is used in over 500 reactions and has a crucial role in metabolism, cellular aging, DNA repair, and gene expression.

Sirtuins are a group of 7 enzymes, specifically deacetylase, which are highly preserved from an evolutionary standpoint, from bacteria to humans. They regulate functions that influence the aging process such as mitochondria synthesis, apoptosis, autophagy, inflammation, intracellular and systemic signaling, DNA repair, etc… They’ve been called the genes of longevity.

These very important processes I have just mentioned do not occur if there is no NAD, which leads us to accumulate damage, age, and die.

That’s how important NAD is. Additionally, NAD levels drop as we age. In fact, it plays a role in the so called “Hallmarks of aging“. 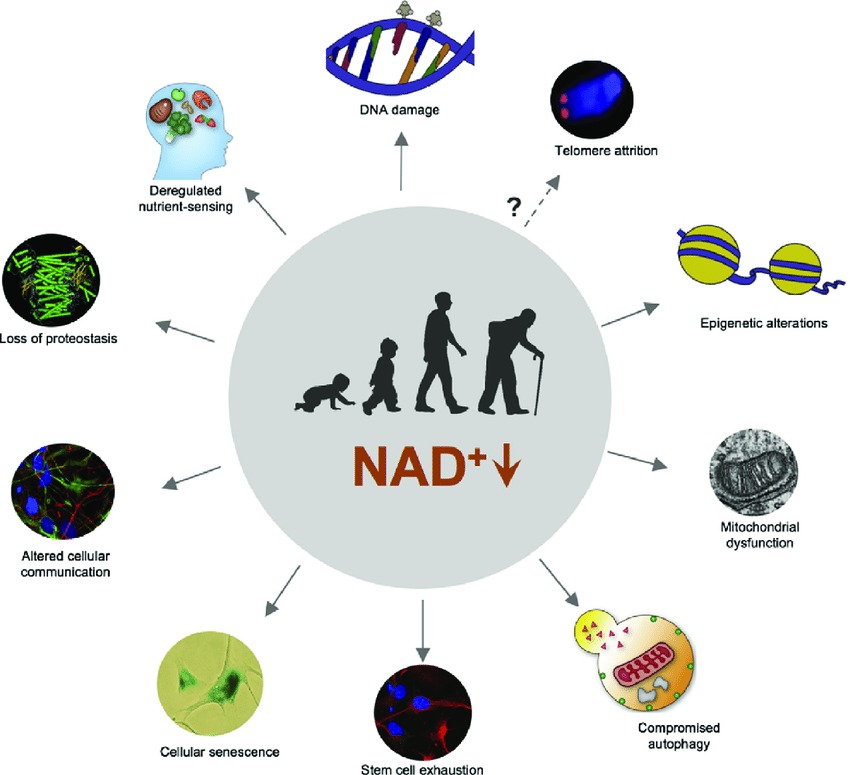 Why do its levels decline over the years?

Like most things in our bodies, it’s a balance between production and degradation; in this case, it is simple: not only does the body produce less, but it also degrades more.

As shown in this chart, there are two fundamental synthesis pathways:

The de novo pathway and the salvage pathway.

In addition to the decline in its production, as already mentioned, its degradation increases, as well. The previously mentioned PARP increase their activity over the years. This totally makes sense: as we age, DNA damage accumulates, and they must increase their activity to repair it, thus consuming more NAD. And there is another enzyme called CD-38, whose activity doubles or triples as we age, and this directly degrades NAD. In fact, it is believed that the benefit of treatments that seek to combat the inflammation that occurs over the years (inflammaging) comes with the fact that they decrease their activity.

What can we do to keep our NAD levels from declining over the years?

The scientific community is investigating exactly this. It is considering the possibility of increasing de novo synthesis, promoting the salvage pathway, and lowering the activity of enzymes that degrade NAD. Sounds simple, right?

Let’s see what we know so far:

So far we know that a flavonoid present in dry parsley, celery, and chamomile tea, called apigenin, may lower its activity.

I hope that I have been able to convey the vital importance of NAD and maintaining its proper levels. I hope this reinforces your use of good nutrition habits, exercise, and supplementation, as I’ve provided a few more reasons as to why we should exercise, eat well, and use vitamin supplements, as is the case with B3.