Do we take enough Omega-3?

A study has demonstrated that the levels of omega-3 EPA (eicosapentaenoic acid) and DHA (docosahexaenoic acid) are low or very low in most parts of the world.

The study authors have made suggestions that health and consumer authorities should review recommendations concerning omega-3 intake and if necessary, supplement diets with foods enriched with omega-3 or even consume tablets containing these fatty acids. These low levels could be explained, according to some experts, by the increase in processed foods that change the omega 6 (proinflammatory) / omega 3 (anti-inflammatory) ratio in our diet.

The study, which shows that most of the population has low levels of omega 3, reopens the debate on whether a “healthy and balanced” diet is sufficient.

One of the eternal debates of Preventive, Proactive, Predictive and Personalized Medicine (MP4) is whether a “healthy and balanced” diet is sufficient to maintain optimal health. We often read messages that corroborate this, but the reality is that it is very difficult to know if we are feeding ourselves in a “healthy and balanced” way. The pace of modern life has meant that we do not have much time to think about what food we are going to buy, what quality of food we should buy, how we are going to cook the food or at what time we are going to eat said meal. Instead, we eat when we have a small window of time, what we have at hand, often precooked meals and highly processed foodstuffs, whose macro and micronutrients we do not know.

One of the pillars of MP4 is the targeted use of nutritional supplementation with the micronutrients which we are missing from our diet, irrespective of how healthy and balanced our diet seems to us. This line of reasoning is further underlined by a recent study (1) published in the Progress in Lipid Research journal which shows a world map of omega-3 levels in the population around the world. The map was prepared using data provided from 298 published scientific studies and shows that the levels of omega-3 EPA (eicosapentaenoic acid) and DHA (docosahexaenoic acid) are low or very low in most parts of the world.

It is widely understood that an omega-3 deficiency in the diet is typically associated with an increased cardiovascular risk, cancer, diabetes, neurocognitive impairment and loss of vision. In order to reach adequate levels of omega-3 it is necessary to eat oily fish -such as salmon, sardines, tuna or cod- several times a week. But as we said in the beginning it is often difficult to implement a diet that is rich in these and other oily fish, particularly in modern Western societies. 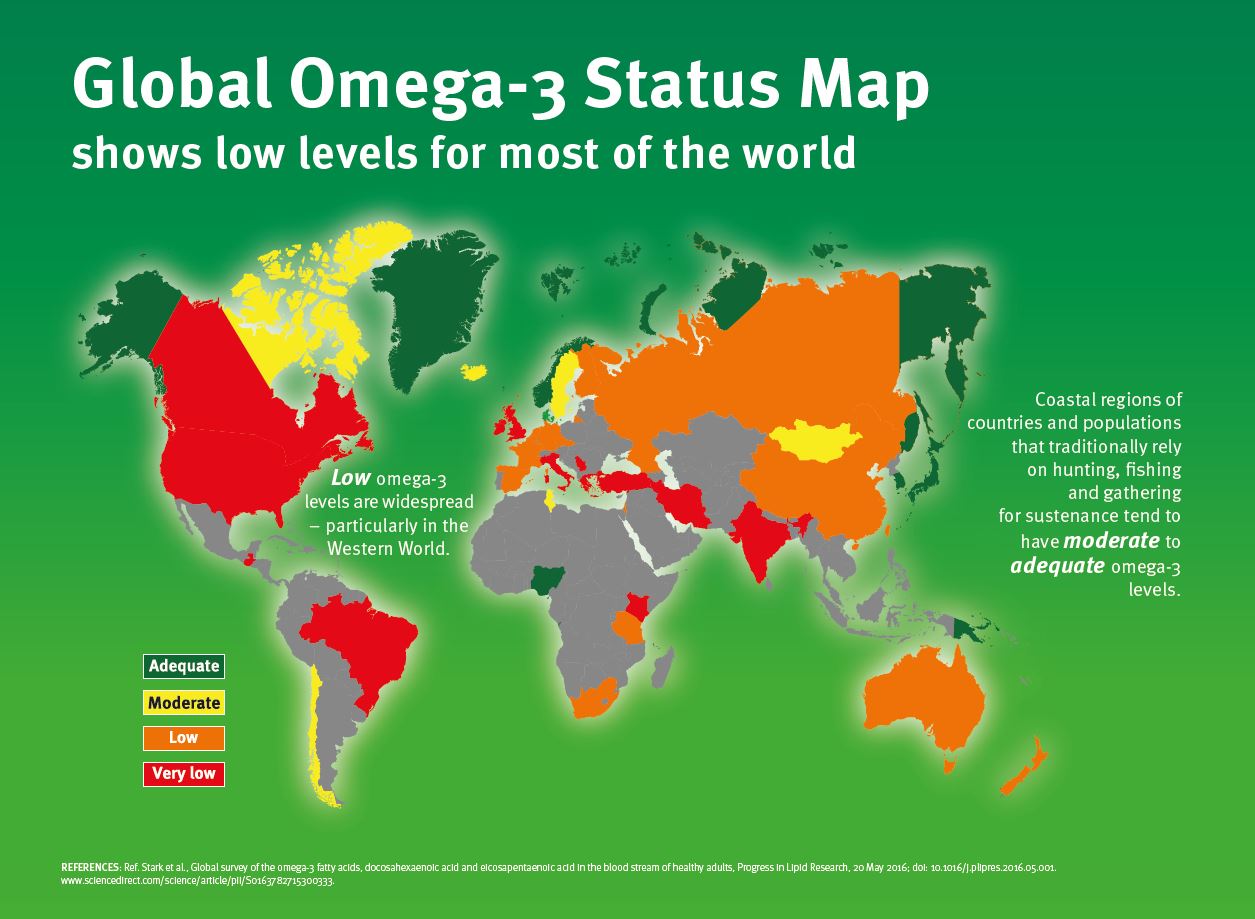 As you can see on the map, only some countries such as Norway, Japan, the state of Alaska, Greenland, Nigeria and some depopulated areas in the northern hemisphere are able to maintain the appropriate omega-3 value. Northern Canada, Iceland, Sweden, Chile and Mongolia have moderate omega-3 levels. These areas with adequate and moderate levels of omega-3 correspond to regions with a tradition of fishing, hunting and gathering. Spain, together with most of the countries around continental Europe, Australia, South Africa, Russia and China all achieve low omega-3 values whilst the United States, United Kingdom, Ireland, Italy, Greece, India and Brazil currently have very low values.

Age Management Medicine is used in support of omega-3 supplementation in those cases in which the diet does not reach the values of excellence required.

In view of the results shown on the map, the authors of the study suggested to health and consumer authorities that they should review the recommendations concerning omega-3 intake and, if necessary, supplement diets with foods enriched with omega-3 or even consume tablets containing these fatty acids. These low levels could be explained, according to some experts, by the increase in processed foods that change the omega 6 (proinflammatory) / omega 3 (anti-inflammatory) ratio in our diet.

One of the many biomarkers we measure as part of the Neolife checks is the IO3 (Omega 3 Index). The objective is to ensure that this is above 8% as the optimal value. Due to our experience accumulated in the clinic, it is exceptionally rare to find a patient whose IO3 values are adequate without taking omega-3 supplements. It is most likely to present in patients living on the coast or those who consume a diet rich in fish. The prescription of omega-3 is usually between 0.5 and 1g of DHA and between 0.75 and 1.5g of EPA. These doses are without a doubt the optimal values required to prevent cardiovascular disease, neurodegenerative disorders, cancer and diabetes.