Why has the VITAL article sparked controversy?

Medical information in the press should always be backed by the recommendations of a medical professional after forming a critical and reasoned impression of the information produced day by day.

Otherwise we can fall into the trap where a supplement with excellent cardiovascular properties is ineffective or a powerful weapon to combat severe osteoporosis in postmenopausal women is useless due to misinterpretation of isolated studies. Medical information should be imbued with evidence, common sense, judgment and, above all, objectivity.

In the news media that talk about medicine there is a clear tendency to report negatively.

Medicine is an inexact science full of dogmas that get debunked over the years thanks to knowledge, progress and scientific evidence. What happens in the field of medicine is that we often find newspaper articles that lack sufficient medical backing, where journalists take “licenses” that, perhaps, are permissible in other areas but in medicine mean resorting to false myths, inaccuracies and even lies.

If we look at the news media that talks about medicine we will find a clear tendency to report negatively: “drug x causes cancer”, “medical malpractice occurred at x hospital”, and yet it is very unusual to see news with a positive spin.

Take, for example, the use of female hormones in post-menopausal woman becoming associated with the risk of breast cancer due to information published in the media. There’s not even a reference in our national press to the American Menopause Society’s 2017 Declaration (1) explaining that the proper use of such hormones dramatically helps women who, due to menopause, have lost the majority of their quality of life, to recover a normal life without any health risks. This Declaration is in direct contrast to the journalistic interpretation of the WHI, a major study on the effects of hormone replacement therapy in women. This study used non-bioidentical hormones, rather than using progesterone to compensate for estrogenic proliferative effects, and used progestogens that boosted these effects, increasing the number of patients with cancer and vascular disease. The WHI saw a huge press backlash, as it notably didn’t include the study E3N-EPIC (2), which explained that the right combination of bioidentical progesterone and estrogens had a neutral (neither protective nor causative) effect on breast and endometrial cancer and on the emergence of undesirable effects at the cardiovascular level. Why didn’t this second study have any impact in the media? Probably because it reported on a positive aspect, on a real advancement in medicine, far removed from the sensationalism associated with headlines.

I’ll give you another example. In 2004 Dr. Morgenthaler, head of urology at Harvard, published in the medical journal with the greatest impact, the New England Journal of Medicine (3), that the correct use of hormone replacement therapy with testosterone is risk-free in terms of producing prostate cancer. He further theorizes that in patients with low testosterone levels there is a greater tendency for cancer to appear. After this article, the “testosterone-prostate cancer” sequence was very affected and references to that relationship in the press began to disappear. However, references to a potential relationship between “testosterone-cardiovascular diseases” began to appear without any proof that this was the case. In other words, the press looked for another way to sensationalize a therapy that can be crucial to improving the quality of life of many of our elderly patients.

Recently, the health section of El Confidencial published an article called “if you want to prevent cancer or heart disease, forget about Omega 3 and vitamin D” full of these falsehoods and inaccuracies that it had previously commented on regarding supplementation with these two elements, and they continue along the lines of reinforcing negative news that affects the health sector. This article was based on the results of the VITAL study, in the hope that none of the readers of El Confidencial would access this article and read it in its entirety with a critical and reasoned eye. And I’ll give you a few examples. 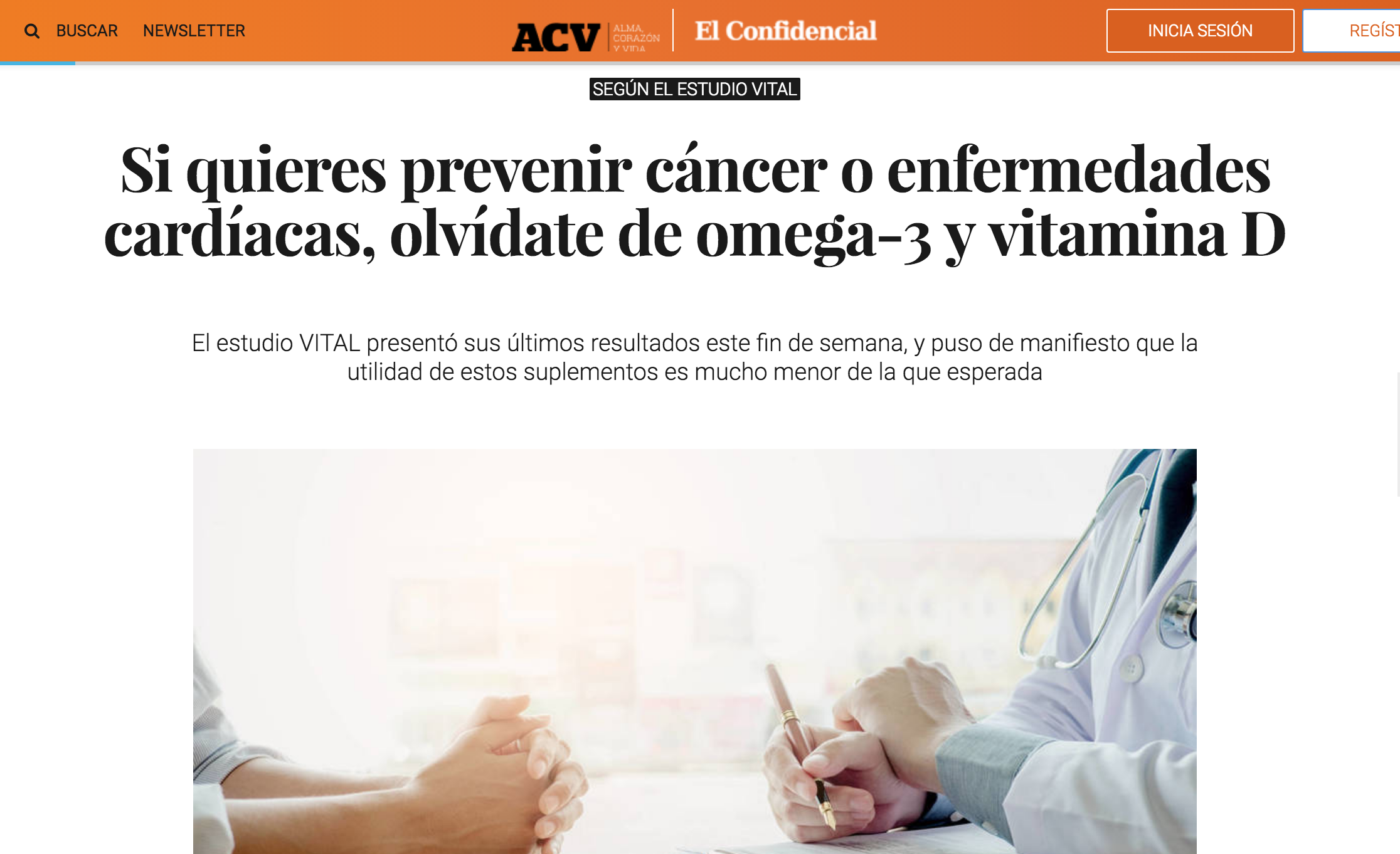 For starters, the journalist claims that half of the American population consumes Omega 3 and/or vitamin D. I suppose he read the article in the New England Journal of Medicine (4) that says that half of the American population takes some kind of supplement, not specifically the two that the article talks about. Therefore, this first inaccuracy, which may seem to us like an example of the author’s poetic license, actually precedes an authentic string of inaccuracies and in some cases flat-out lies.

The article says word-for-word, “There have been no myocardial infarctions, attacks or cardiovascular deaths when consuming omega 3 on a daily basis after analyzing the data of participants in the study”. However, if we look at the VITAL study, a 28% decrease in the risk of myocardial infarction and a 50% decrease in the risk of fatal heart attack is reported, something that does not square up with what the article publishes and what it echoes a bit later but immediately discredits, denying the importance of such improvement. It also does not explain what the VITAL study itself refers to by the term “fatal infarction”, whether it refers to “sudden deaths” (a 50% decrease in the possibility of sudden death would seem like a wonderful effect of fatty acids).

Whereas in the VITAL study we see a positive but statistically insignificant (and therefore not demonstrable) difference between treatment and placebo, the author ignores such relationship. However, when it is negative, albeit statistically insignificant, the author doesn’t hesitate to keep it in. That’s why he leaves out the fact that patients who take vitamin D have fewer cases of cancer and doesn’t hesitate to boldly proclaim that those who consume omega 3 do indeed, even though it is outlandish to claim that “omegas” produce cancer (that doesn’t matter).

He goes on to mention an editorial by Rosen and Keaney in the New England Journal of Medicine, framing it as if these authors had stated that these supplements “should not be taken, period”. In reality, that editorial explains that there are doubts regarding their effectiveness, as there are articles showing they work and others showing they do not, but they never bluntly recommend against taking them. I guess he didn’t expect any readers to read that article either.

Later, the article mentions a study, which is not really even an study but a meta-analysis, which sows doubts regarding the use of vitamin D to improve bone health, and I understand that the journalist of El Confidencial trusted that no one would read that one either. Well, at Neolife we have read and observed that the meta-analysis is done on patients who took an average daily dose of 400-1000UI of vitamin D, and improvement was observed especially in patients with vitamin D levels below 25nmol/liter. In other words, the meta-analysis uses lower doses than we use in our treatments, and indeed improvements are observed in patients, especially those with lower levels. The writer of the El Confidencial article misrepresents all of this by stating “just one month ago a study published in The Lancet Diabetes and Endocronology showed that vitamin D did not help prevent fractures or improve bone density as opposed to what has traditionally been promised by those marketing the product.” Normally the therapeutic doses are 3-4 times those that have been used in the meta-analysis, and there is still a benefit even though the writer has forgotten, again, to mention this.

There is another typical journalistic practice when it comes to health news. Whenever there is a doctor who champions a treatment or a way of practicing medicine, you have to take them down. There the author looks to an article in the NYT about Dr. Holick recounting his business career without clarifying that this has to do with the effectiveness or not of vitamin D and omega supplements. Despite this, the NYT article, which in theory vilifies the use of vitamin D, indeed makes a footnote on a statement by the National Academy of Medicine about the proven usefulness of vitamin D in risky situations such as osteoporosis.

Casting even more doubt on supplementation, the author contradicts himself in the last paragraph when he mentions that “the lack of agreement on the use of Omega 3 is increasingly evident. In Spain, the consensus on fats and oils in food….”. So which is it, lack of agreement or consensus?

In short, medical information in the press should always be backed by the recommendations of a medical professional after forming a critical and reasoned impression of the vast amount of information produced day by day. Otherwise we can fall into the trap where a supplement with great cardiovascular properties is ineffective or a powerful weapon to combat severe osteoporosis in postmenopausal women is useless due to misinterpretation of isolated studies. Medical information should be imbued with evidence, common sense, judgment and, above all, objectivity.

In Neolife, all of our medical practice is based on the latest scientific evidence, always read with a critical but constructive mindset to discover all the ways of improvement applicable to the lives of our patients.