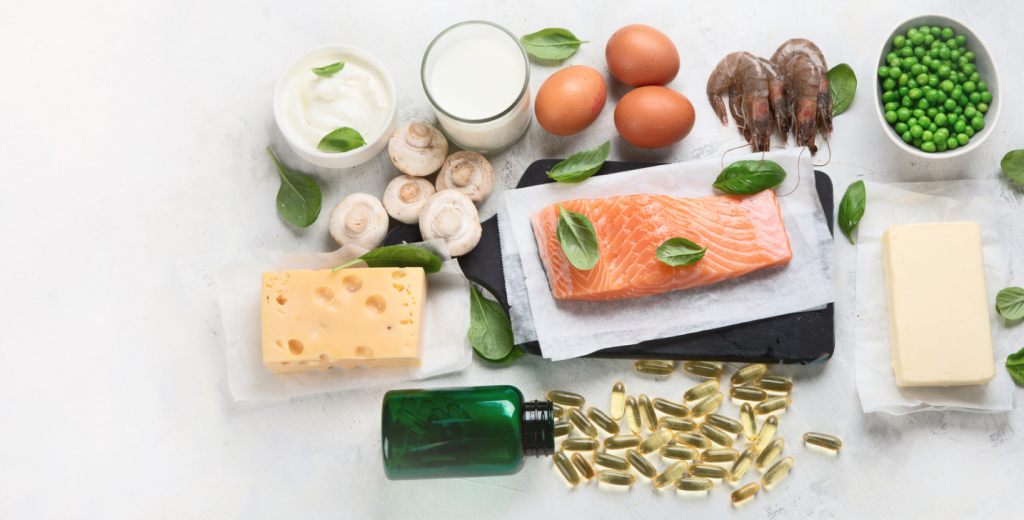 Vitamin D, beyond the bone

Vitamin D is considered as one of the main hormones in bone metabolism and calcium homeostasis. However, it also develops an essential role in other physiological phenomenal and inadequate levels (either too much or too little) are linked to the development of relevant diseases.

Vitamin D binds to its specific receptors to develop its functions. These receptions are not found just in the classic tissues such as bones, bowels, or kidneys. But many different tissues also have these receptions, allowing for activated vitamin to develop their roles in hormonal secretion (not just in the Protohormone or PTH, but it also affects other hormones such as insulin), in immune response, cell proliferation and cancer, mainly.

Only a small part of the production of vitamin D3 comes from food. The main source of vitamin D derives from sunlight exposure.

Vitamin D3 is produced on the skin through the 7-dehydrocholesterol pathway, when the B ring of the skeleton is broken by the effects of UVR radiation giving way to Previtamin D3 (PreD3). This production is quite quick, reaching its highest peak in just a couple of hours. However, extended exposure to UVR rays, turns it into two biologically inactive molecules: lumisterol and tachysterol. This conversion is reversible, which is why a prolonged exposure to solar radiation does not trigger a toxic production of vitamin D3. Excess production turns into lumisterol and tachysterol; and if the levels of PreD3 drop, these 2 inactive molecules will become PreD3 once again.

Intensity of solar rays varies depending on the season of the year and the latitude. The further people are from the Equator, the lower their solar exposure will be. Furthermore, clothing and sunscreen decrease the production of vitamin D in the covered areas.

Activation of vitamin D3 and mechanism of action 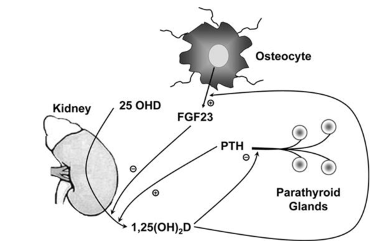 For vitamin D3 to become activated it must be transformed into Vit D 25OH. Several enzymes of cytochrome P450 are responsible for this activation, although the most studied enzyme is CYP27A1. These enzymes are found mainly in the liver, although they are also found in other tissues. In any case, to be completely active, Vit D 25OH must be transformed into 1,25OH VitD2 by CYP27B1. This process takes place mainly on the proximal renal tubule, although this enzyme is also found in multiple extra-renal locations such as bones, parathyroids, immune cell system, and other tissues.

The regulation of the CYP27B1 enzyme in the kidneys is controlled by PTH (which stimulates its activation) and the fibroblast growth factor (FGF-23) that inhibits it.

Additionally, the 1,25 (OH) vitamin D controls its own levels inducing CYP42, which promotes the catabolism of both 25OH Vit D and 1,25OH VitD2.

Outside of the kidneys, macrophages express a non-functional CYP24 that reduces the catabolism of Vit D. Keratinocytes also have CYP27B1 but with a normal CYP24 function which is the same that Vit D2 1,25OH regulates its own levels in the epidermis.

The vitamin D receptor is part of a super-family of nuclear receptors acting as a heterodimer interaction with specific DNA sequences and inducing activation or the repression of transcription. The control of this process requires co-regulators that are different in each tissue, and make vitamin D response specific, depending on the location.

Typically, non-classic actions of vitamin D are grouped in 3 different types, that allow for simplification, although it’s fairly artificial:

The ability of 1.25 OH Vit D to regulate hormonal secretion plays an essential role in the maintenance of bone mineral density. Not only does it regulate PTH secretion, but it also stimulates insulin secretion. Pancreatic B cells express Vit D receptors (VDR) and calbindin-D28k, which also modulated intracellular calcium that can stimulate the liberation of insulin and protect β-cells from cytokine-mediated destruction. All of the above, makes it possible to link vitamin D deficit with metabolic syndrome , DM II or gestational diabetes. It has also been related to certain polymorphisms of the vitamin D-receptor gene to DM I.

On the other hand, 1.25 OH Vit D also stimulates secretion of FGF23 (fibroblast growth factor) which is mainly produced in the bones. Moreover, increase of FGF23 inhibits the production of 1,Oh Vit D in the kidney, which can lead to hypophosphatemia, vitamin D deficit and osteomalacia.

Inflammatory cells have vitamin D receptors, thus explaining the immunomodulatory role of this vitamin. It can inhibit T-cell proliferation in macrophages can also generate Vitamin D, which highlights its involvement in both acquired and innate immunity.

The involvement of 1.25OH vitamin D in the function and development of Th17 lymphocytes has been discovered very recently, and it is also related to several autoimmune diseases. This is why vitamin D may have a beneficial effect against the development of certain autoimmune diseases such as inflammatory bowel disease, rheumatoid arthritis, autoimmune diabetes, and even multiple sclerosis.  Certain studies have used the administration of vitamin D to prevent or to treat these diseases with very promising results.

3. Regulation of cell proliferation and differentiation:

The epidermis can produce vitamin D and it’s also capable of transforming it into 1.25 (OH) 2 Vit D. And this vitamin D can suppress the immune response, which contributes partly to the development of psoriasis, for example.

It also influences the hair follicle cycle, where vitamin D seems to play an essential role through the activation of its receptors in the prevention of some types of autoimmune alopecia.

The antiproliferative action of vitamin D in many cellular tissues and the list of tumor tissues expressed by the vitamin D receptor, highlight its potential anti-cancer effect.

In keratinocytes, 1.25 (OH) 2Vit D has shown to promote repair UVR-induced damage, reducing cell apoptosis and increasing survival after exposure. Although a reduction has been seen in many types of tumors, the tumors in which the beneficial effect of vitamin D has been extensively studied has been in breast, colon, and prostate cancer. Certain studies have shown a reduction in colon and breast cancer of up to 77% in women taking 1100 UI of Vit D and 1400-1500 mg of calcium.

What are the recommended levels of vitamin D?

Despite de basis for everything explained in this article, the effects that we have named as “non-classical” effect of vitamin D in relation to different diseases are not conclusive from the point of view of scientific literature to be able to establish a causal relationship. This is partly due to discrepancies in the assessment of vitamin D levels.

The main source of vitamin D comes from sun exposure and only a small part from intake. In Spain and in Europe, supplements contain de cholecalciferol or vitamin D3, whereas in the USA they are mainly made up of ergocalciferol, vitamin D2. Therefore, the methods used should be able to measure both forms. Additionally, the measurement of 25 (OH)D is difficult due to the hydrophobic natural of the molecule, its high affinity for its transport protein, its low concentration in samples, and because both of these structural forms are very similar. For this reason, it is important to individualize vitamin D levels and consider special situations that must be considered as risky if having a vitamin D deficiency.

In general, the recommendation for the general population under 70 years old, is of approximately 600UI per day of vitamin D and 800 UI in people over that age. In the abovementioned situations, which involve a higher risk of deficiency, it is advised to increase intake by 50%, and during pregnancy and lactation by up to 150%.

As regards to sun exposure, at least 3 hours of indirect exposure, avoiding the middle of the day and wearing clothes. This may be enough to obtain appropriate levels of vitamin D without increasing the risk of skin cancer.